Risk Stratification in the General Population 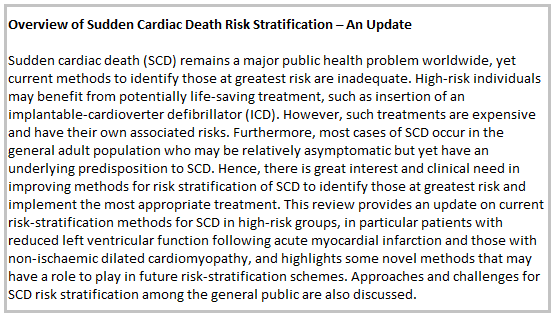 Risk Stratification in the General Population

From a population perspective, reliable identification of people in the general public at highest risk of malignant ventricular arrhythmias would provide the greatest impact on decreasing the incidence of SCD. Since a major cause of SCD is in the context of an acute coronary syndrome or myocardial infarction, identification of those at risk of an acute atherosclerotic event and subsequent VT/VF may be a useful avenue to pursue. Although risk stratification for coronary artery disease is well established in clinical practice, there are currently no accurate methods available to identify individuals at risk of plaque rupture and the development of VT/VF. Epidemiological studies on certain serum biomarkers, such as N-Terminal pro-B type natriuretic peptide, non-esterified fatty acids, interleukin-6 and circulating antibodies, appear to show some potential in helping to identify those in the general public at risk of acute plaque rupture and sudden VT/VF,48–51 although more data is required before such biomarkers can be used clinically. Advances in cardiac CT technology have allowed the characterisation of atherosclerotic plaque features that can provide additional information on the risk of plaque rupture and subsequent SCD.52–54 However, this imaging modality would not be suitable for mass screening on a population level. Other imaging modalities, such as echocardiography, may have a role to play in SCD risk assessment in the general population. For example, echocardiographic measurements of left ventricular mass and diameter have been shown to be associated with an increased risk of sudden death among the general public.55,56

A more practical method to assess SCD risk in the general population is to use ECG-based parameters and large-scale screening. A Finnish cohort of over 10,000 middle-aged subjects has helped provide some of the most useful data on ECG-based risk of SCD to date.57–60 In this cohort, QRS prolongation of ≥110 ms, intraventricular conduction delay (but not bundle branch block), and early repolarisation of at least 0.2 mV, were all independent predictors of arrhythmic death. However, the low prevalence of each of these markers may limit their utility in large-scale screening.

The clinical significance of early repolarisation on the surface ECG has gained increasing interest following two seminal studies demonstrating a link between early repolarisation syndrome (ERS) and idiopathic VF/sudden death.60,61 Investigators have since compared ERS in cardiac arrest survivors with preserved ejection fraction,62 in families with sudden arrhythmic death syndrome63 and other families with an early repolarisation pattern on the ECG64 and in Asian populations.65 ERS in the inferior leads, especially in cases without other QRS complex abnormalities, appears to predict the occurrence of VT/VF but not non-arrhythmic cardiac events, suggesting that early repolarisation is a specific sign of increased vulnerability to ventricular arrhythmias.66 Programmed ventricular stimulation was not found to enhance risk stratification in patients with ERS, even among those at highest risk who survived a cardiac arrest.67 Despite the increasing body of evidence in this area, controversy still remains on the exact clinical significance, implications and optimal management in patients with ERS on the surface ECG.68,69

Other novel ECG-based parameters may also be potentially useful in population screening for SCD. In a recent study of 14,024 participants without left ventricular hypertrophy in the Atherosclerosis Risk in Communities (ARIC) study, beat-to-beat spatiotemporal variability in the T-vector on standard 12-lead ECGs was found to be associated with SCD over a median follow-up of 14 years.70 In another large, retrospective population-based cohort study using the ARIC database, ECG-deep terminal negativity of the P-wave in V1 was also found to be associated with an increased risk of SCD.71