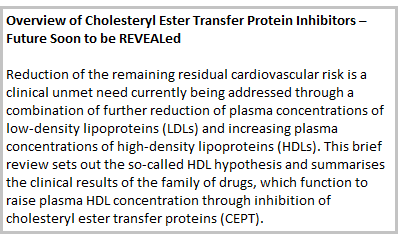 The human CETP gene has been mapped to chromosome 16 on the 16q21 locus, spanning about 25 kb and consisting of 16 exons and 15 introns. The current availability of DNA arrays capable of screening the entire genome for many thousands of SNPs in large cohorts has provided a new tool for studying the aetiology of complex diseases. However, the putative instrumental variables associated with alleles and clinical outcome are not always appropriate and the method is also limited by problems associated with linkage disequilibrium. Voight and colleagues reported a large Mendelian randomisation study confirming that lower CETP activity, when associated with both lower LDL-C and higher HDL-C, is associated with cardiovascular benefit28. Studies of CETP gene polymorphisms have been controversial. The B2 allele of the Taq1B SNP of the CETP gene (which is associated with low CETP activity and raised HDL-C) was found to be accompanied by a lower than average risk of CVD29. Further analysis showed that this association was limited to one ethnic group (Chinese)30. In a 10-year follow-up study of more than 18,000 women, among 350,000 SNPs, it was found that three SNPs in or close to the CETP gene (rs708272, rs432992 and rs7202364) were associated with an increase in plasma HDL-C and a reduced incidence of myocardial infarction in this population31. Current genetic analysis indicates that a decrease in CETP activity is correlated with a decrease in CVD risk.

Measuring CETP activity is technically challenging and work by Ritsch and colleagues provides our sole reference data that there is a linear relationship between activity and concentration32. Prospective observational cohort studies to investigate the relationship between the plasma concentration of CETP activity or concentration and the risk of cardiovascular events generally show an inverse correlation, suggesting a negative association with CETP33–38. Of the three studies that evaluated populations free of CVD, two of them assayed CETP activity long-term, with a 10–15-year follow-up33,34, whilst the other study measured concentration and had a two-year follow-up35. The remaining three studies considered patients with clinical CAD or CHD and measured CETP activity36–38. Assessment of CETP activity or mass requires purification from total plasma or serum, which is then a measurement made in the absence of the proper biological complexity of whole blood and its many affecting factors; for example, the presence of ApoC-I, an isoform of apoliprotein C that has been recently demonstrated to be an endogenous inhibitor of CETP activity39. Although these prospective cohort studies are strongly suggestive that low concentrations/activities of CETP may correlate with increased CVD, these data are entirely reductive and do not to address the clinical effect of CETP inhibition in an appropriate patient population.

Currently, we have limited and insufficient precise knowledge of the complex dynamics between plasma lipoproteins and activation of vascular cells and cell membranes to explain the apparent paradox between the prospective observational epidemiology and genome- wide analysis for the role of CEPT inhibition. To enter into a discourse on whether the disparity is due to confounding effects or reverse causality would be fatuous at this point.