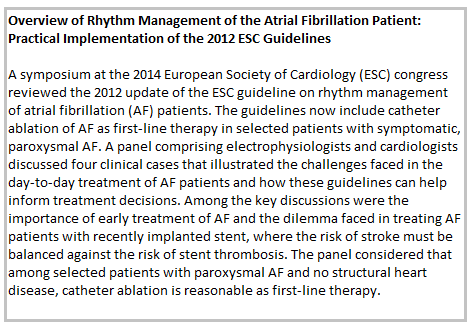 Dr Kuck began his discussion by stating that the progression from PAF to persistent AF should be a new endpoint in AF treatment and, to illustrate this point, returned to case 2. If this patient is allowed to remain in AF for 5 years and subsequently becomes symptomatic, he will be more difficult to treat as he may have structural changes including remodelling of the left atrium. This led to the question: when should catheter ablation be performed? In Dr Kuck’s opinion, as early as possible, ideally at the time of PAF to prolong the time to progression to chronic forms of AF. The ongoing Early treatment of Atrial fibrillation for Stroke prevention (EAST) Trial will determine whether rhythm control therapy, when applied early after initial diagnosis of AF, can prevent cardiovascular complications associated with AF.13

In order to demonstrate the importance of early treatment, Dr Kuck presented a study that investigated the long-term procedural success of catheter ablation in patients with symptomatic PAF and normal left ventricular function. After a median 1 procedure, stable sinus rhythm was achieved in 80 % of patients.14 By contrast, in a study of the 5-year efficacy of catheter ablation for long-standing persistent AF, success rates for single and multiple ablation procedure were 20 % and 45 %, respectively.15 Patients with a total AF duration <2 years had a significantly higher ablation success rate than patients with AF duration ≥2 years (76.5 % vs. 42.2 %, respectively). These data show that prolonging the decision to undergo catheter ablation may not be best for the patient.

In RecordAF, a worldwide prospective study, patients with recent onset AF were allocated to rate or rhythm control.16 AF progression (paroxysmal to persistent) at 12 months occurred in 15 % of patients. Patients treated with rhythm control were less likely to show progression than those treated only with rate control (11 % vs 26 %; p<0.001). Independent predictors of AF progression included history of heart failure, history of hypertension and rate control rather than rhythm control.16 In the absence of large randomized controlled trials, these data may help inform clinical decision-making. The ongoing ATrial FibrillaTion ProgrESsion Trial (ATTEST) aims to determine whether early radiofrequency ablation treatment in subjects with PAF delays AF progression compared with drug therapy (rate or rhythm control).17

This seminar has stimulated discussion between electrophysiologists and cardiologists and highlighted the need for large clinical trials to inform early treatment decisions. It may be concluded that among selected patients with PAF and no structural heart disease, catheter ablation is reasonable as first-line therapy.