↳ This is a section part of Moment: Real World Outcomes of Left Atrial Appendage Occlusion 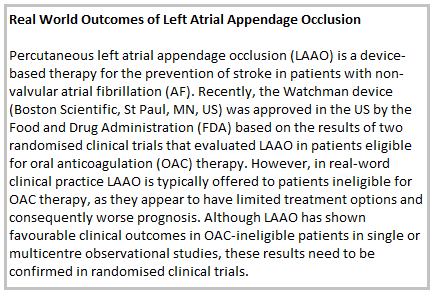 The left atrial appendage (LAA) is a well-documented source of cardiac emboli in patients with non-valvular AF.9 Percutaneous LAA occlusion (LAAO) is a device-based therapy that has emerged as an alternative to OAC in patients with non-valvular AF.10–15 Evidence confirming the efficacy of LAAO is largely derived from the PROTECT AF randomised clinical trial, in which the Watchman device (Boston Scientific, Marlborough, MA, US) was found to be non-inferior to warfarin for the primary efficacy endpoint of stroke, cardiovascular death and systemic embolism.10 Importantly, four-year follow-up data from the PROTECT AF trial demonstrated significantly reduced all-cause mortality with the Watchman device compared with warfarin therapy.11 Conversely, the PREVAIL study, a similar randomised trial that was performed to evaluate the high incidence of safety concerns in the PROTECT AF trial, failed to confirm non-inferiority of the Watchman device compared with warfarin due to an unexpectedly low number of events in the control group.12 Nevertheless, the study proved safety of the implantation process even in new centres. In Europe, the Watchman device acquired Conformité Européenne (CE) approval in 2005. The relatively small number of patients in randomised trials, however, has hindered the approval of the device in the US by the Food and Drug Administration (FDA) for several years. After three consecutive expert panels, the FDA eventually approved the Watchman device on 13 March 2015, based on all available data including new, unpublished data from the PREVAIL trial.16 The FDA stated that the device is indicated to reduce the risk of thromboembolism from the LAA in patients with non-valvular AF who:

Today, the main controversy about LAAO relates to the absence of randomised clinical trial evidence evaluating its safety and efficacy in patients with contraindications to OAC therapy: the Watchman device was assessed in warfarin-eligible patients. In OAC-contraindicated patients, there remain however limited or no options that provide adequate stroke prevention. These patients present significant healthcare and social problems, especially the more elderly cohorts that suffer cardioembolic stroke.19 The most recent European Society of Cardiology (ESC) Guidelines on the management of AF suggest that “Interventional, percutaneous LAA closure may be considered in patients with a high stroke risk and contraindications for long-term oral anticoagulation” (IIb indication, Level of evidence B).20 Furthermore, the 2014 ESC/European Association of Cardio-Thoracic Surgeons Guidelines on myocardial revascularisation state that “Percutaneous LAA closure and antiplatelet therapy may be considered in patients with atrial fibrillation undergoing PCI if a high stroke risk and contraindication for long-term combined antiplatelet + oral anticoagulation therapy is present” (IIb indication, Level of evidence B).21 In fact, these guidelines reflect the use of LAAO in the real world. In a 22-centre, non-randomised study that included 1,047 patients who underwent LAAO with the ACP device, the most common indication for LAAO were (1) previous major bleeding (4 7%), followed by (2) high risk for bleeding (35 %), and (3) avoidance of triple (dual antiplatelet + OAC) therapy for coronary artery disease and coronary stenting (22 %).14 In the ASA Plavix Feasibility Study With Watchman Left Atrial Appendage Closure Technology (ASAP) study, a non-randomised evaluation of the Watchman device in patients with a contraindication to OAC therapy, a history of haemorrhagic/bleeding tendencies was the most common reason for warfarin ineligibility (93 %).13 Nevertheless, it should be noted that currently there is no universally accepted definition of contraindication to OAC therapy, so in the real world the criteria for offering LAAO vary significantly between centres.