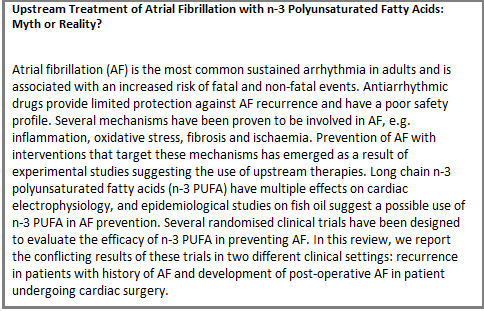 Cardiac surgery is often complicated by the occurrence of supraventricular arrhythmias and particularly AF (post-operative AF [POAF]). Almost 30–40 % of patients undergoing coronary artery bypass grafting (CABG) surgery develop POAF, most frequently between the second and the third post-operative day.36 This percentage rises nearly to 70 % in patients undergoing concomitant valve surgery. The risk of developing this arrhythmia is related to the presence of several clinical risk factors (e.g.prior history of AF, heart failure, left atrial enlargement, left ventricular systolic dysfunction, post-operative withdrawal of beta-adrenergic receptor blockers and chronic obstructive pulmonary disease), but the stronger predictor is advancing age.37 POAF has both clinical and economic implications: patients who develop POAF are at increased risk of cerebrovascular events, haemodynamic instability and congestive heart failure. Furthermore, POAF is associated with increased length of stay in the intensive care unit and prolonged hospitalisations and is therefore responsible for significant patient morbidity and healthcare costs.36

Several drugs (e.g. amiodarone, sotalol and beta-adrenergic receptor blockers) have proved effective in reducing the risk of POAF. As multiple acute factors contribute to the development of AF after cardiac surgery (enhanced sympathetic and parasympathetic tone, atrial stretch, fluid and electrolyte abnormalities, metabolic abnormalities, oxidative stress, myocardial and pericardial inflammation) other treatments have been tested and are currently under evaluation. Based on the evidence of anti-inflammatory and antioxidant proprieties of n-3 PUFA several studies have been designed to prove their efficacy on POAF prevention (see Table 1).

Calò and colleagues evaluated the efficacy of n-3 PUFA for the prevention of POAF in 160 patients randomised to polyunsaturated fatty acids (n-3 PUFA 2 g/day) and to a control group. Treatment was initiated at least 5 days preoperatively and continued until hospital discharge. Patients randomised to n-3 PUFA had a significantly lower incidence of POAF compared with the control group (15.2 % versus 33.3 %; p=0.013) and a mean shorter hospital stay (7.3 [2.1] versus 8.2 [2.6] days; p=0.017).38

Heidth et al. randomised 102 patients to n-3 PUFA (100 mg fish oil/kg body weight/day) given intravenously or free fatty acids (100 mg soya oil/kg body weight/day) starting on admission to hospital and ending at discharge from intensive care. POAF (primary endpoint) occurred in 15 patients (30.6 %) in the control and in 9 (17.3 %) in the n-3 PUFA group (p<0.05). Furthermore, patients allocated to a n-3 PUFA treatment had to be treated in the intensive care unit for a shorter period of time than the control patients.39

Based on these promising results, Heidarsdottir and colleagues conducted a prospective, double-blinded, placebo-controlled trial randomising 168 patients admitted for CABG and/or valvular repair surgery to receive n-3 PUFA capsules (1,240 mg EPA and 1,000 mg DHA) or olive oil capsules for 5–7 days prior to surgery and postoperatively until hospital discharge. Unlike previous studies, the authors found no difference in the incidence of POAF (54.2 versus 54.1 %; p=0.99) and in the length of stay.40

Similar disappointing results were found by Saravanan et al. who failed to demonstrate the efficacy of n-3 PUFA, 2 g/day administered orally (versus olive oil, placebo) in reducing the incidence of POAF in 103 patients undergoing CABG surgery. Despite higher n-3 PUFA levels in serum and right atrial tissue in the active treatment group, there was no significant difference between groups in the primary outcome of POAF (placebo versus n-3 PUFA; 43 % versus 56 %; p=0.28).41

Sorice and colleagues randomised 201 patients undergoing CABG to n-3 PUFA 2 g/day or placebo for at least 5 days before surgery and until hospital discharge. The authors found a significant reduction in the incidence of POAF in the n-3 PUFA group. Interestingly, subgroup analysis showed a significant reduction of POAF only in the group including patients treated with n-3 PUFA undergoing ‘on-pump’ CABG surgery, with no effect on those who underwent ‘off-pump’ cardiac surgery. Notably, therapy with n-3 PUFA had no effect on length of post-operative hospital stay.43

Farquharson and colleagues undertook a double-blind randomised controlled trial to examine the effectiveness of fish oil supplementation on POAF after CABG and valve procedures in 200 patients randomised to receive fish oil (providing 4.6 g/day of n-3 PUFA) or a control oil starting 3 weeks before surgery. The longer period of pre-treatment did not have the expected results: 194 subjects completed the study, with 47 of 97 subjects in the control group and 36 of 97 subjects in the fish oil group developing POAF in the first 6 days after surgery (primary endpoint, OR 0.63; 95 % CI 0.35–1.11). Notably there was a significant decrease in mean length of stay in the ICU in the fish oil group (ratio of means 0.71; 95 % CI 0.56–0.90).44

The conflicting results of all these previous trials gave the impulse for the organisation of an international multicentre double-blind, placebocontrolled, randomised clinical trial, the Omega-3 Fatty Acids for Prevention of Post-operative Atrial Fibrillation (OPERA) trial, with the enrolment of 1,516 patients scheduled for cardiac surgery. Patients were randomised to receive n-3 PUFA (1 g capsules containing ≥840 mg n-3 PUFA as ethyl esters) or placebo, with preoperative loading of 10 g over 3 to 5 days (or 8 g over 2 days) followed postoperatively by 2 g/day until hospital discharge or post-operative day 10, whichever came first. The primary endpoint (POAF lasting longer than 30 seconds) occurred in 233 (30.7 %) patients assigned to placebo and 227 (30.0 %) assigned to n-3 PUFAs (OR 0.96; 95 % CI 0.77–1.20; p=0.74). Furthermore, no significant differences between the two groups were observed for any of the secondary endpoints: post-operative AF lasting longer than 1 hour, resulting in symptoms, or treated with cardioversion; post-operative AF excluding atrial flutter; time to first postoperative AF; number of AF episodes per patient; hospital utilisation; and major adverse cardiovascular events, 30-day mortality. Treatment was safe in terms of bleeding and other adverse events.45

Two interesting analyses46–7 on biohumoral data from the OPERA trial have recently been published confirming the limited influence of mechanical and haemodynamic factors and reinforcing the role of oxidative stress in the pathogenesis of POAF. N-terminal of the prohormone brain natriuretic peptide (NT-proBNP) or high-sensitivity cardiac troponin T (hs-cTnT) on the morning of surgery, or changes in their levels between morning of surgery and post-surgery, were not significantly associated with POAF after adjustment for clinical and surgical characteristics.46 On the contrary a relatively linear association with incident POAF of validated, fatty acid-derived oxidative stress biomarkers (F2-isoprostanes, isofurans and F3-isoprostanes) measured in plasma and urine on the day of surgery and on the second post-operative day could be described.47

Two metanalyses,33,48 which included the same eight38–45 clinical trials discussed above, on POAF prevention with n-3 PUFA have recently been published. Interestingly, the authors obtained opposite results: Mariani et al.33 found no significant benefit, whereas Costanzo and colleagues48 found that preoperative supplementation with n-3 PUFA significantly prevented the occurrence of POAF in patients undergoing cardiac surgery. The difference in results of the two studies can be explained by the different adjudication of events in the trial of Saravanan and colleagues.41 Costanzo and colleagues48 used the primary outcome measure of any AF >30 seconds in the monitor recordings (number of events with n-3 PUFA versus control, 22 versus 18) whereas Mariani and colleagues33 considered clinical AF (29 events in the n-3 PUFA group versus 22 in the controls). Costanzo and colleagues conducted a subgroup analysis showing particular benefit in patients undergoing CABG surgery.

In accordance with the results of the biohumoral analysis in the OPERA trial,46,47 and following the hypothesis of a strong involvement of oxidative stress in the development of POAF, Rodrigo and colleagues49 designed a controlled trial to assess whether the reinforcement of the antioxidant system, through n-3 PUFA plus antioxidant vitamin supplementation, could reduce the incidence of POAF. A total of 203 patients scheduled for on-pump cardiac surgery were randomised to placebo or supplementation with n-3 PUFA (2 g/day) (EPA:DHA ratio 1:2), vitamin C (1 g/day) and vitamin E (400 IU/day). POAF occurred in 10 of 103 patients (9.7 %) in the supplemented group versus 32 of 100 patients (32 %) in the placebo group (p<0.001). The efficacy of antioxidant therapy with vitamin C in preventing POAF as well as reducing in hospital stay was confirmed in a recently published metanalysis.50 The results of trials discussed do not support the routine use of n-3 PUFA in POAF prevention, but their combination with other drugs with antioxidant proprieties seem to have promising perspectives that should be confirmed in larger adequately powered controlled trials.