Introduction on Selecting the Appropriate Ablation Strategy: the Role of Endocardial and/or Epicardial Access 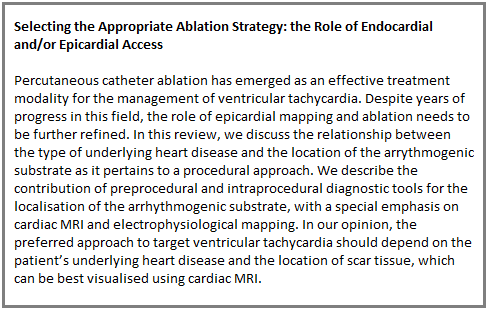 Percutaneous ablation for ventricular tachycardia (VT) was first attempted in 1983 and has rapidly evolved to become an important option for controlling recurrent VTs.1 Endocardial ablation remained the only percutaneous approach until epicardial access was introduced by Sosa et al. in 1996 and thereafter became progressively more available as an adjunctive strategy for the treatment of challenging arrhythmias.2 The improved arsenal of percutaneous technologies, and the advances in understanding VT substrates, paved the way for consideration of catheter ablation early on in the treatment of patients with VT.3 Despite the progress made in the field, some key questions regarding the role of percutaneous epicardial mapping and ablation in the treatment of VT remain: When should an epicardial approach be used in the treatment of VT? Should this depend on the disease substrate? Should it be performed during an endocardial mapping procedure, or after an endocardial ablation has failed? We will discuss criteria for selecting an appropriate approach to map and ablate VT, focusing on location and imaging of the arrhythmogenic substrate, specific situations where an epicardial approach may be beneficial and situtations where it is not indicated.