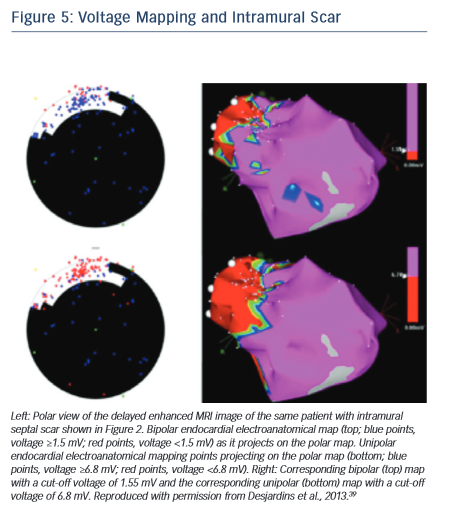 Understanding the underlying arrhythmogenic substrate that leads to VT is essential for a successful ablation procedure. As a result of the 3D structure of the 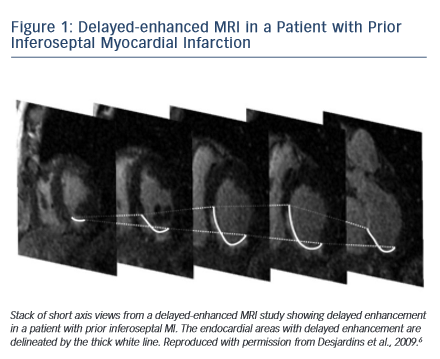 myocardium, critical components of the VT reentry circuit may be confined to locations deep in the subendocardium, the midmyocardium or the epicardium, and may be beyond the reach of current endocardial ablation techniques. On the other hand, a single circuit may also encompass the endocardium and extend into the epicardium, with critical components that can be reached from either the left ventricular endocardium or the epicardium. Although VTs originate from scar tissue in the majority of patients with structural heart disease,4 they may occasionally have a focal source and can arise from the outflow tract region, similar to patients with idiopathic ventricular arrhythmias.

Delayed enhanced cardiac MRI is used as the gold standard for imaging of scar tissue. The location of scar tissue on preprocedural MRI determines the odds of reaching the circuit from the endocardium or the epicardial space in a given patient. The location of the scar predicts, to some extent, the location of the critical VT isthmus.5,6 In patients with ischaemic cardiomyopathy, the scar is located in the subendocardium and extends to the epicardium depending on the patient’s specific coronary artery distribution (Figure 1). Hence, in the majority of postinfarction patients, the arrhythmogenic tissue can be accessed from the endocardium. In a series of 98 patients with prior MI, only two patients required an epicardial ablation procedure for VT.7 Similar data have been described by Sarkozy et al. who reported a prevalence of only about 6 % of patients with prior infarctions in whom epicardial circuits were confirmed.8 Therefore, in these cases, an endocardial approach should be considered as first line.

On the other h 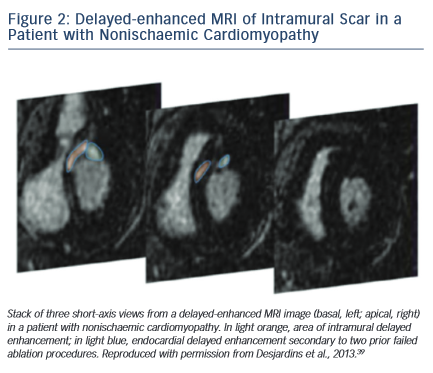 and, scars in patients with nonischaemic cardiomyopathy are most often located intramurally. An epicardial origin is the next most frequent scar location, followed by endocardial scarring.9 Often the scar has a basal periannular distribution.10 The scar distribution is particularly important with respect to procedural outcome.5 The lowest success rates were reported in patients in whom the majority of the scar had an intramural distribution (Figure 2).5 The value of a preprocedural MRI with respect to a planned epicardial procedure is highest in patients with nonischaemic cardiomyopathy, especially if the scar is located epicardially (Figure 3). An epicardial approach is also beneficial if the scar is located intramurally within the left ventricular free wall. An intramural septal location (Figure 2) cannot be reached from the epicardial space in most patients, and therefore this approach should not be used in such a scenario.

In patients with cardiac sarcoidosis, the arrhythmogenic substrate originates intramurally, and reaches the endocardium or epicardium by extension of the disease process. In a series of patients with cardiac sarcoidosis in whom mapping and ablation of VT was performed, most VTs originated from a periannular area surrounding the tricuspid annulus and did not require epicardial access.14 However, if imaging shows predominant epicardial scarring, an epicardial approach should be considered.5 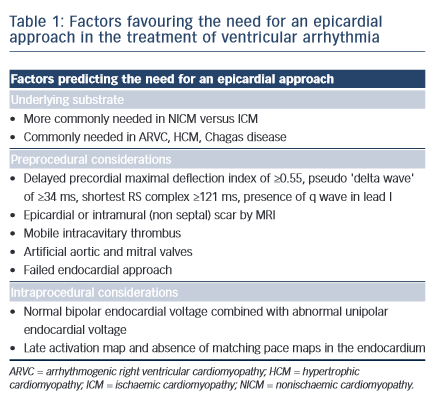 For other types of structural heart disease including hypertrophic cardiomyopathy15 or Chagas disease, an epicardial ablation is often necessary and should be considered early in the ablation procedure.16,17

The majority of idiopathic ventricular arrhythmias originate from the outflow tracts18 with the right ventricular outflow tract being the most common origin.19,20 Idiopathic ventricular arrhythmias can also originate in the left ventricular outflow tract, the aortic sinuses of Vasalva,21 the epicardium,3 the papillary muscles22 or any other location within the heart including the intramural myocardium.23 An endocardial approach is most successful for the majority of these arrhythmias. For epicardial idiopathic arrhythmias, a combined approach from the coronary venous system and adjacent anatomic sites has been most effective, with a success rate around 70 %.24 In some reports, a subxiphoid epicardial approach has been used to eliminate those arrhythmias.24–26 However, several groups have more recently demonstrated that this approach has a lower success rate due to epicardial fat and the proximity of coronary arteries, and given the higher potential for periprocedural complications,26–28 this approach should be reserved for selected cases only.