The pathogenesis of TC is not well established, and many aspects of the condition, such as the predisposition in post-menopausal women and the characteristic pattern of regional wall motion abnormality, remain unexplained.7,8 Leading hypotheses include catecholamine excess and microvascular dysfunction (see Figure 2). Less likely explanations include coronary spasm, dynamic mid-cavity or left ventricular outflow tract obstructi 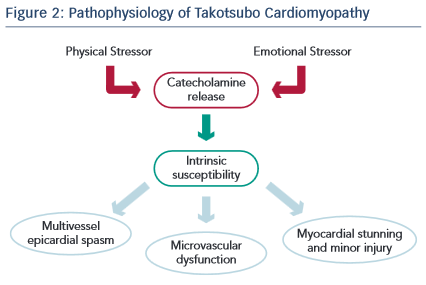 on and plaque rupture with spontaneous thrombolysis. The catecholamine hypothesis is supported by the observations that: i) plasma catecholamines levels are elevated in some patients;9 ii) pheochromocytoma associated and neurogenic cardiomyopathies produce a similar transient regional wall motion abnormality of the left ventricle in the setting of high catecholamine activity; iii) an immobilisation-induced stress rat model has been shown to elevate catecholamine levels and produce reversible ventricular ballooning; and iv) in a mouse model high levels of epinephrine has been shown to be negatively inotropic. The vascular hypothesis is supported by the frequent detection of impaired coronary microcirculatory function as well as the occasional finding of multi-vessel coronary spasm.

TC is an acute reversible cardiac syndrome that has a striking female predominance, with approximately 90 % of cases occurring in women, the vast majority of whom are post-menopausal. Due to their advanced age, affected patients often have cardiovascular comorbidities and approximately 10 % have incidental coronary artery disease.10 An estimate for its incidence, outside of Japan, comes from the Nationwide Inpatient Sample database in the US, which represents a random sample of all admissions from 20 % of community hospitals. In 2008, there were 6,837 patients diagnosed with TC among 33,506,402 hospitalisations, amounting to a rate of 0.02 %.11 It is estimated that the syndrome accounts for approximately 2 % of patients initially suspected of an acute coronary syndrome.12

Chest pain and dyspnoea are the most common presenting symptoms. The symptoms and signs are similar to those in other acute cardiac conditions characterised by acute myocardial ischaemia or heart failure. A characteristic feature of the syndrome is its relationship to emotional or physical stressful triggers. Emotional stressors range from a discrete event resulting in anger, frustration, grief or loss; to ongoing stressful situations such as moving to a new home, involvement in legal proceedings or challenging interpersonal relationships at home or at work. Physical stressors typically involve exacerbation of obstructive airways disease, major surgery, orthopaedic trauma, neurological catastrophes and other critical illnesses. TC closely resembles the entity previously known as neurological stunned myocardium, which is now believed to be the same condition.13 Of note, approximately one- third of cases occur without an identifiable stressor.