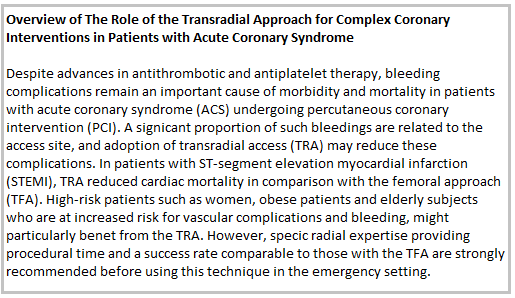 Considerable evidence supports conversion to TRA for most PCI procedures in ACS, with an emphasis on decreasing access site bleeding and vascular complications without compromising procedural outcome. Beside the development of new more selective and safe antithrombotic agents, the use of TRA remains likely the best way to significantly affect access site-related bleeding risk. A high-risk subset of patients for bleeding and vascular complications such as complex STEMI patients, women and the elderly, might particularly benefit from the TRA whenever appropriately available and performed by skilled operators.

Complications arising from the TRA are infrequent, negligible and mostly avoidable compared with TFA complications. Certain limitations to the TRA such as longer radiation exposure during the learning curve and the potential inuence on radial artery patency have slowed down acceptance of this technique. Therefore, the modern interventional cardiologist should go through a high-volume radial training programme, and after developing the optimal radial expertise, adopt the TRA whenever possible. Adding the ulnar artery access expertise could further reduce the crossover rate to TFA, and lower the intrinsic risk of bleeding and vascular complications associated with TFA. Femoral approach will likely remain the viable alternative for patients not eligible for the wrist access and accessory access for larger devices in patients with cardiogenic shock. Complex PCIs in patients with ACS, cardiogenic shock and left main culprit, should be performed only by experienced high-volume radialists.

Finally, it is important to remember that the choice of access site is only one aspect of improving the patients outcome. All interventions should be performed according to the highest available standards, providing the best care for each individual patient without sacricing procedural success and long-term prognosis.