↳ This is a section part of Moment: How to Select the Most Appropriate Patient and Lesion to be Treated with a Coronary Bioresorbable Vascular Scaffold 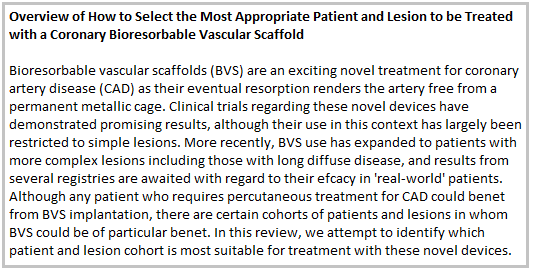 Recent years have seen a huge expansion in the development of BVS many of which are undergoing preclinical or clinical assessment. One of these, the ABSORB™ BVS (Abbott Vascular, Santa Clara, California, US) is currently available with the DESolve™ BVS (Elixir Medical, Sunnyvale, California, US) being available for clinical use later in the year. The ABSORB BVS is made from semicrystalline poly-L-lactic acid (PLLA) coated with an amorphous poly-D, L-lactide (PDLA) polymer eluting everolimus. Degradation of the scaffold is mainly through hydrolysis, a process that takes approximately two years to complete. The efficacy of the currently used ABSORB BVS (revision 1.1) has been assessed in the multicentre, single-arm ABSORB Cohort B trial, which recruited 101 patients with single- or two-vessel de novo disease, all of which received a 3 x 18 millimetre (mm) BVS.

Patients were divided into two groups for follow-up purposes with group 1 being assessed at six months and two years and group 2 at one and three years, respectively. Scaffold area was shown to progressively increase during follow-up with no differences in late lumen loss (LLL) (0.29+/- 0.16 mm versus 0.25+/-0.22 mm, p=0.439) being noted between small vessels (<2.5 mm) and large vessels (2.5 mm) at two-year angiographic follow-up.3 At 18 months follow-up in the entire cohort, there were three non-ST elevation myocardial infarctions (MIs) and four ischaemia-driven target lesion revascularisations (TLR).4 In the ABSORB EXTEND study, aiming to recruit 1,000 patients, in which the recruitment of patients with disease in smaller vessels (>2.0 mm) as well as those with long lesions is allowed, the ischaemia-driven TLR and major adverse cardiac events (MACE) rates at one-year has been reported as 1.8 and 4.2 %, respectively.

Definite/probable stent thrombosis (ST) rate was 0.9 %.5 Data from the treatment of real-world patients is also emerging. In the prospective, single-centre, BVS Expand registry in which the liberal use of BVS is permitted with the exception of patients with ST-elevation MI (STEMI) and restenotic lesions, the use of BVS was associated with one MI and one non-target vessel revascularisation (TVR) at 30-day follow-up in a cohort of 131 patients.6 BVS has also been evaluated in the context of acutecoronary syndromes although meaningful clinical follow-up data is not yet available.7,8 Other studies currently underway include the ABSORB III and ABSORB IV studies that aim to compare ABSORB to XIENCE PRIME™ Everolimus Eluting Stent (Abbott Vascular, Santa Clara, California, US).

The DESolve bioresorbable scaffold is made from a PLLA-based polymer eluting novolimus and has been designed to be fully resorbed within two years. In the multicentre CE Mark DESolve Nx trial, which enrolled 126 patients worldwide, quantitative coronary angiography at six months demonstrated a LLL of 0.21+/-0.34 mm with an increase in scaffold area over the same interval (5.86>6.78 mm2, p=0.001). The incidence of MACE was 3.25 % with one cardiac death, one target-vessel MI and two clinically indicated TLR. There were no reported cases of ST.9 Following these results, DESolve has received CE Mark approval and the scaffold is expected to be available for commercial use in a variety of lengths and sizes later this year.