↳ This is a section part of Moment: Use Of Thrombectomy Devices In Primary Percutaneous Interventions For ST-Elevation Myocardial Infarction - An Update 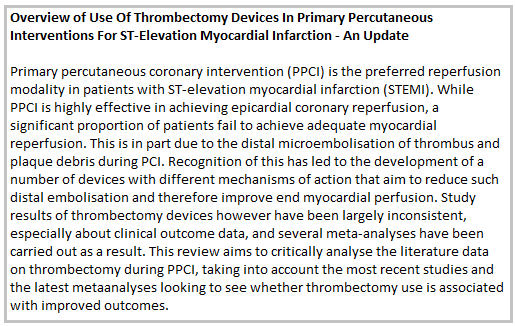 A meta-analysis by Kumbhani et al., which included 3,936 patients comparing manual/mechanical thrombectomy versus PCI alone from 18 trials showed that manual aspiration was associated with a benefit in reducing MACE, including mortality at 6 to 12 months compared with PCI alone.36 This was supported by the Long-Term Clinical Efficacy of Thrombectomy Devices in Acute ST-Elevation Myocardial Infarction (ATTEMPT) meta-analysis, which pooled analyses on 2,686 individual patient’s data from 11 randomised trials.37 ATTEMPT demonstrated that at a median of 1-year follow-up, all-cause mortality, MACE, death and myocardial infarction were significantly lower in the thrombectomy group.37 However, interestingly, survival benefit was confined to patients treated with manual thrombectomy alone with an estimated 34 patients needed to be treated to prevent one death at 1 year.37 Further metaanalyses by Costopoulos et al., which combined 10 randomised trials, finding that manual thrombectomy was associated with better MBG, STR and TIMI 3 flow rates as well as reduced mortality (43 %; p=0.04), which contrasted to mechanical thrombectomy, where no benefit was seen,38 and by Bavry et al., which showed a significant increase in mortality in patients treated with mechanical thrombectomy compared with PCI alone (5.3 % versus 2.8 %, respectively).39

However not all meta-analyses have been positive. A Bayesian metaanalysis by Mongeon et al., which included 21 trials totalling 4,299 patients (16 trials that used manual aspiration thrombectomy device), thrombectomy was shown to result in more STR and TIMI 3 flow.40 However, there were no significant reductions in death, recurrent MI or stroke at 30 days post procedure. The results were similar when analysis was confined to manual thrombectomy.40 It was felt that the overall number of endpoints were low and follow-up periods were short, which may explain why no differences were seen in clinical endpoints.41 Despite this, another more recent meta-analysis by Tamhane et al., consisting of 3,904 patients, also did not detect a difference in 30-day mortality42 despite a trend towards improved survival rates with the use of manual thrombectomy (odds ratio, 0.57;p=0.05). De Luca et al., conducted the most recent meta-analysis, which included 4,514 patients from 21 RCTs undergoing manual or mechanical thrombectomy, showed that thrombectomy did not reduce 30-day mortality, or reinfarction. Manual but not mechanical thrombectomy was shown to significantly improve post-procedural TIMI 3 flow. Importantly this meta-analysis raised the question that thrombus aspiration may not be a risk-free procedure. Systemic embolisation can occur, and in this meta-analysis, thrombus aspiration was associated with a trend towards an increased rate of stroke (p=0.06)43 – this was noted with both types of thrombectomy device.