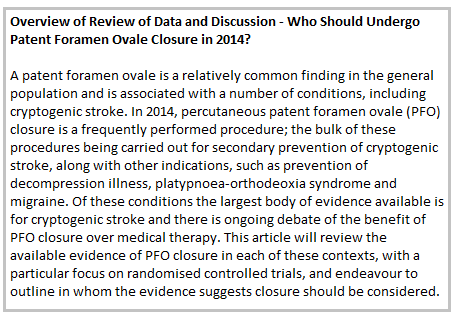 A multicentre, randomised, open-label trial of device closure with a STARFlex occluder (NMT Medical Inc., Boston, Massachusetts, US) versus medical therapy (aspirin and/or warfarin). The primary endpoint was a composite of stroke or TIA during two years of followup, death from any cause during the first 30 days, or death from neurological causes between 31 days and two years. The cumulative incidence (Kaplan–Meier estimate) of the primary endpoint was 5.5 % in the closure group (447 patients) as compared with 6.8 % in the medical therapy group (462 patients) (adjusted hazard ratio [HR], 0.78 95 % confidence interval [CI] 0.45–1.35 p=0.37). The respective rates were 2.9 % and 3.1 % for stroke (p=0.79), and 3.1 % and 4.1 % for TIA (p=0.44). Of concern, in the device arm there was a greater incidence of atrial fibrillation (5.7 versus 0.7 % p<0.001) and 1.1 % of patients had gross thrombus visible on the device by TOE at six months. Rates of successful device implantation were surprisingly low at only 89 % with a large number of residual shunts – effects that may be device attributable. In addition, a cause, other than paradoxical embolism, was usually apparent in patients with recurrent neurological events.

A European study of 414 patients randomised to closure with the Amplatzer PFO occluder (St. Jude Medical, Saint Paul, MN, US) or to receive medical therapy (antiplatelet or anticoagulation at the discretion of the treating physician). The primary endpoint was a composite of death, non-fatal stroke, TIA or peripheral embolism. The primary endpoint occurred in 3.4 % (7) of the 204 device treated patients and 5.2 % (11) of the 210 medically treated group (HR 0.63 95 % CI 0.24–1.62 p=0.34). The power of the study was further reduced by a large number of patients (65) being lost to follow-up and 28 patients crossing from the medical to the device arm.

This trial enrolled 980 patients in the US and Canada, and randomised in a 1:1 manner to receive either medical therapy (75 % with antiplatelet therapy and warfarin in the remainder) or the Amplatzer PFO occluder in addition to antiplatelet therapy. They were followed up for a maximum of seven years over a mean of 2.6 years. Raw data analysis was not possible due to a greater rate of drop-out in the medical arm producing a statistically lower total patient-years of follow-up. In the intention-to-treat analysis there was a very low rate of recurrent stroke with no statistical difference between the groups: 6 % (16) in the medical arm versus 2 % (9) in the device arm (p=0.08 HR 0.49 95 % CI 0.22–1.11). However, a number of events occurred prior to closure and analysis as treated found device treatment to be better than medicine with five and 16 events, respectively (HR 0.27 95 % CI 0.00–0.75 p=0.007). Analysis of the pre-specified per-protocol groups, which included the patients who received and adhered to the allotted therapy and had no major violation of inclusion or exclusion criteria, also showed a significant difference: six events in closure group versus 14 (HR 0.37 95 % CI 0.14–0.96 p=0.03). Furthermore, trends from subgroup analyses suggested that those with a substantial shunt (defined as patients with over 20 microbubbles on TOE) and those with associated ASAs had more benefit, and that recurrent events were anatomically more likely to be non-PFO related in the closure group.

The REDUCE trial (ClinicalTrials.gov identifier: NCT00738894) is ongoing and currently enrolling. The aim is to enrol just under 700 patients in around 80 sites in the US, Canada and Europe, and compare the Gore® Septal Occluder (Gore) with antiplatelet medication only in those with recent presumed CS or embolism. Estimated primary completion date is 2015 and publication will probably be in 2018.

None of the published trials met their primary endpoints, although issues have been raised about them and their design. The relatively low number of events in all the trials (vastly less than predicted when the trials were designed24) meant that insufficient power is probable. Specifically in the PC-Trial, an intended power of 80 % was reduced to 40 % due to the overall lack of events.25 This was compounded by slow recruitment, which in CLOSURE I trial led the investigators to reduce the target sample size by over 600 patients. Such recruitment problems may have indicated that clinicians excluded the patients perceived at highest risk, preferring to go directly to device closure, thus biasing the studies in favour of medical therapy – which itself was non-standardised. Additionally, the RESPECT trial suffered with a large number of dropouts from the medical arm, a significant proportion of who underwent off-label device closure. There was also variation in rigour with which PFO-probable strokes were enrolled between studies – a particular problem in the CLOSURE 1 study as the inclusion of TIAs increases uncertainty. A further criticism of the trials was length of follow-up. The relatively young population are clearly at risk for many decades, but importantly, along with ageing usually comes other risks for stroke, not related to PE – making simply extending the follow-up of current studies potentially flawed.

None of the trials incorporated any form of risk stratification within the device closure groups, meaning those with lower risk anatomy may have obscured the benefit to those with higher risk anatomy (for example with concomitant ASA). There was an attempt to address this in the RESPECT trial with a subgroup analysis, and also in a recent meta-analysis performed on the three trials. A study by Rengifo-Moreno et al.26 included 2,303 patients (1,150 undergoing device closure and 1,153 receiving medical therapy) with a mean follow-up of 3.5 years. There was a significant reduction in stroke and TIA in the device group compared with medical therapy (HR 0.59 95 % CI 0.36–0.97 p=0.04) and a suggestion, although not statistically significant, that patients with a substantial shunt benefitted the most (HR 0.35 95 % CI 0.12–1.03 p=0.06). A further paper by Khan et al.27 also suggested a beneficial effect from device closure with hazard ratios of 0.67 (95 % CI 0.44–1.00) in the intention-to-treat cohort, 0.62 (95 % CI 0.40–0.95) in the per-protocol group and 0.61 (95 % CI 0.40–0.95) in the as-treated group.

These results must be interpreted with caution due to the heterogeneity in the trials; particularly concerning medical therapy and device employed. However, Khan et al. attempted to address this by also pooling only the results from the RESPECT trial and PC-Trial, as they both employed the Amplatzer device. This appeared to enhance the robustness of their findings with hazard ratios of 0.54 (95 % CI 0.29–1.01), 0.48 (95 % CI 0.24–0.94) and 0.42 (95 % CI 0.21–0.84) in the intention-to-treat, per-protocol and as-treated populations, respectively. In addition, a further meta-analysis published last year by Ntaios et al.28 showed that risk of recurrent stroke was reduced in those closed with the Amplatzer device but not in those who had a STARFlex device.

The Risk of Paradoxical Embolism (RoPE) study,29 has been used to develop and test risk models for application in selecting patients in the future most likely to benefit clinically and in designing ongoing trials of PFO closure for CS.

Overall these studies indicate that patients are at a lower risk of recurrent stroke than initially expected, PFO closure can be performed very safely with the Amplatzer device and that there is likely to be additional benefit of device closure above medical treatment in carefully selected patients, and in particular those with large shunts, ASAs or both.30