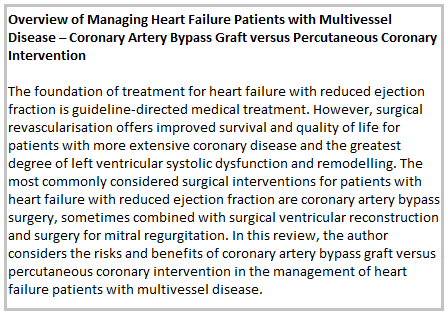 The most common cause of heart failure with reduced ejection fraction (HFrEF) in the industrialised world is coronary heart disease.1 Patients with an ischaemic aetiology of left ventricular systolic dysfunction have significantly higher mortality rates than those with non-ischaemic aetiologies.2 This more aggressive course represents the convergence of ischaemic myocardial fibrosis and endothelial dysfunction, which are superimposed on the progressive nature of the left ventricular dysfunction often with comorbidities such as diabetes and hypertension. The foundation of treatment for HFrEF is guideline- directed medical treatment.3 This is associated with a significant improvement in survival and quality of life, but not a return to normal activities. The most commonly considered surgical interventions for patients with HFrEF are coronary artery bypass surgery, sometimes combined with surgical ventricular reconstruction (SVR) and surgery for mitral regurgitation.

Percutaneous coronary intervention (PCI) has been less well studied in this setting. In a recent retrospective study from Alberta, Canada, Nagendran and colleagues identified 2,925 patients with coronary artery disease and left ventricular dysfunction (ejection fraction <35 %) of whom 1,326 underwent surgery and 1,599 received PCI.4 In a Cox proportional hazard analysis of the propensity-matched subgroups, surgery resulted in significantly lower rates of repeat revascularisation and better survival rates compared with PCI at 1, 5, 10 and 15 years. Following the SYNTAX study, the recommendation for patients with multivessel disease is invariably surgery and not PCI especially if the SYNTAX score is >30.5 Transplantation and left ventricular assist devices are indicated in highly selected patients with advanced disease.6 In patients with HFrEF who have coronary artery disease the essential question is whether flow-limiting obstructions should be treated with coronary artery bypass surgery.

About 30 years ago two celebrated randomised trials of coronary artery surgery were carried out. By modern standards of statistical evaluation the results should probably be considered neutral. Each trial managed to find a subgroup, usually not pre-specified, with a positive result. The Coronary Artery Surgery Study (CASS) noted that a subgroup of 78 patients with three-vessel disease and a left ventricular ejection fraction (LVEF) of 35–50 % had a 5-year mortality rate of 10 % where assigned to surgery and 19 % where assigned to medical treatment, which rose to 12 % and 35 %, respectively, at 7 years (p=0.009).7 Most of these patients had angina, few had heart failure and patients with an LVEF <35 % were excluded. The Veterans Administration Coronary Artery Bypass Study included 325 patients with impaired left ventricular function but excluded patients with ‘serious heart disease’.8 The 5-year mortality rates were 20 % with surgery and 27 % with medical treatment (non-significant difference). The 7-year mortality rates were 26 % with surgery and 37 % with medical treatment (p=0.049) and 47 % and 51 %, respectively, at 11 years (non-significant). A meta-analysis including 549 patients suggested an approximate 40 % reduction in mortality rate (p=0.02) in patients with left ventricular dysfunction compared with those with preserved ventricular function.9 But again, most of these patients had angina and few had developed heart failure.

In the absence of appropriate randomised controlled trials for revascularisation of patients with HFrEF, outcomes from observational studies have been used to make decisions in clinical practice. Such studies influence the outcome with treatment, which depends on a complex mixture of the effects of the intervention, the skills of the surgeon and the process by which patients are selected for treatment. This last factor is probably the most important. Results from an observational study in 2002 indicated that revascularisation might reduce mortality rates by 80% in patients with extensive viable myocardium but with no effect in those without extensive viability.10 Kunadian and co-workers conducted a meta-analysis of observational studies including 4,119 patients with a mean age of 64 years and an LVEF of approximately 25 % in those receiving surgical revascularisation.11 The perioperative mortality rate was around 5 %, which is similar to the 4 % noted in the Surgical Treatment for Ischaemic Heart Failure (STICH) trial.12 The observed 5-year survival rate was 73 % which is similar to that of modern medical treatment in a similar age group and much better than that seen in patients who received coronary intervention in either of the earlier trials of revascularisation.7,8 This shows that surgeons can select patients who can be operated on with reasonable results but does not show whether the outcome is better or worse than with medical treatment alone.

Unfortunately, recent randomised trials that have examined treatment for coronary artery disease that included an intensive medical regimen, such as the Medicine, Angioplasty or Surgery Study (MASS) ll and the Clinical Outcome Utilising Revascularisation and Aggressive Drug Evaluation (COURAGE) trial, excluded patients with severe left ventricular dysfunction.13,14 The Bypass Angioplasty Revascularisation Investigation in Type 2 Diabetes (BARI 2D) trial included patients with left ventricular dysfunction but only enrolled 17.5 % with an LVEF <50 %.15 The International Study of Comparative Health Effectiveness with Medical and Invasive Approaches (ISCHEMIA) is still in progress but excludes patients whose LVEF is <35 %.16