↳ This is a section part of Moment: Left Ventricular Assist Devices in the Management of Heart Failure 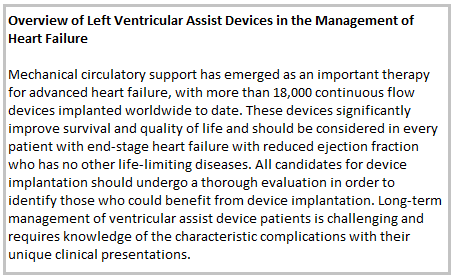 Heart failure (HF) is a leading cause of morbidity and mortality worldwide, affecting 1–2 % of the adult population in western countries with incidence of 5–10 per 1000 persons per year.1,2 It is estimated that the prevalence of HF will continue to increase as the population ages and, according to the American Heart Association (AHA), by the year 2030 the prevalence of HF in the US alone will rise to over 8 million patients, representing a 25 % increase compared to the year 2010.3 HF is one of the common causes for hospitalisation, representing 1–2 % of all hospital admissions and the leading reason for admission in individuals above 65 years of age.4–6

HF is a progressive disease7 with approximately 5 % of HF patients suffer from end-stage disease refractory to medical therapy.8,9 The Heart Failure Association of the European Society of Cardiology (ESC) defined advanced HF as a state in which patients have significant cardiac dysfunction with severe HF symptoms, such as dyspnoea and/or fatigue, occurring at rest or with minimal exertion (NYHA functional class III or IV) despite maximal medical and device (cardiac resynchronisation therapy) therapy.10 In addition to the aforementioned symptoms, patients with advanced HF usually have objective measurements of peak VO2 (oxygen uptake) <14mL/kg/min, a 6-minute walk distance <300 meters, and poor cardiac function.10,11 The prognosis of patients with advanced HF is dismal, with life expectancy of less than two years.11,12 At this stage, advanced therapies are considered, including heart transplantation, continuous inotropic therapy, mechanical circulatory support or hospice.1,10,11 Heart transplantation remains the preferable therapy for advanced HF, but the number of transplants done worldwide is trivial compared to demand.13 Thus, durable mechanical circulatory support (MCS) devices have emerged as an important therapy for advanced HF.13,14
To date, over 18,000 continuous flow devices have been implanted worldwide.13,14 In the US alone, 131 hospital centres are approved to implant permanent MCS devices, demonstrating the staggering expansion of MCS as a therapeutic option for end-stage HF.15