↳ This is a section part of Moment: Pharmacological Treatment Of Patients With Chronic Systolic Heart Failure 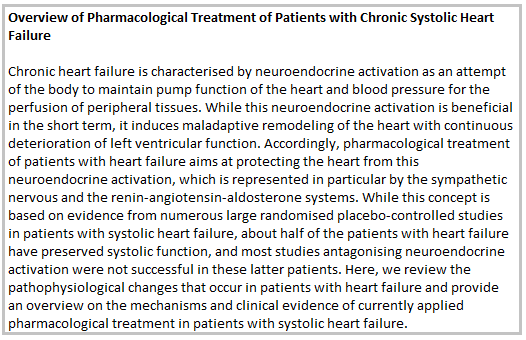 Currently there are two lead compounds of this class on the market, spironolactone and eplerenone. While the former is less specific and antagonises mineralocorticoid receptors, the latter is more specific for aldosterone receptors. Together, they are classified as MRAs. The first randomised placebo-controlled outcome study with a MRA was the Randomized Aldactone Evaluation Study (RALES),35 in which HF patients in NYHA functional class III and an LVEF ≤35 % were randomised to spironolactone (25–50 mg once daily) or placebo added to conventional treatment, at that time consisting predominantly of diuretics (100 %), ACE-inhibitors (95 %) and digitalis (~75 %). Compared with placebo, spironolactone improved symptoms, decreased hospitalisation for worsening HF (by 35 %) and overall mortality (by 30 %).35 Of note, this improved survival was due to both reduction of death from progressive HF and sudden death from cardiac causes.35 While hyperkalaemia was rare, gynaecomastia as a side effect occurred in 10 % versus 1 % of patients treated with the MRA versus placebo, respectively.35

In the Eplerenone Post-Acute Myocardial Infarction Heart Failure Efficacy and Survival Study (EPHESUS),36 treatment of patients with acute myocardial infarction complicated by LV dysfunction (LVEF ≤40 %) and HF with the more specific aldosterone antagonist eplerenone reduced overall and cardiovascular mortality by 15 % and 17 %, respectively. Furthermore, hospitalisations for cardiovascular or any reasons were reduced. Interestingly, eplerenone also reduced sudden cardiac death by 21 %.36 An advantage of EPHESUS36 over RALES35 was that in the former, a much higher percentage of patients were treated with β-blockers (75 % versus 11 %).

To finally resolve whether, also in patients with stable HF, MRAs would improve prognosis added to a background therapy that included β-blockers, and whether MRAs were efficient also in patients with mild symptoms of HF (RALES was performed in NYHA functional class III patients), the recent Eplerenone in Mild Patients Hospitalization And Survival Study in Heart Failure study (EMPHASIS-HF)37 enrolled 2,737 patients in NYHA functional class II and a LVEF ≤35 %. In fact, eplerenone reduced the primary composite endpoint of death from cardiovascular causes or hospitalisation for HF by 37 %, and cardiovascular as well as overall mortality per se by 24 %, respectively. Hospitalisations for heart failure and for any cause were also reduced with eplerenone. Mild hyperkalaemia (serum potassium [K+] >5.5 mmol/L) was (as expected) somewhat more frequent (+64 %) in eplerenone- compared to placebo-treated patients, while hypokalaemia was less frequent with eplerenone.37

Taken together, MRAs reduce morbidity and mortality in patients with HF, but also acute myocardial infarction complicated by LV dysfunction and HF. Both MRAs can provoke hyperkalaemia and worsen renal function, while spironolactone, but not eplerenone, can induce gynaecomastia as a side effect. Thus, in the current ESC guidelines, MRAs are recommended in addition to ACE-inhibitors and β-blockers in all patients with HF with a LVEF ≤35 % and maintaining symptoms (NYHA II-IV).6 However, similar to ACE-inhibitors, MRAs should be limited to patients with adequate renal function and normal serum K+ concentrations.6

A common side effect of ACE-inhibitors is to provoke dry cough due to inhibition of bradykinin breakdown by chymase. Furthermore, some Ang II can still be generated despite ACE-inhibition through the so-called ‘escape phenomenon’. The rationale behind the development of ARBs was to circumvent these limitations of ACE-inhibitors. Although ARBs produced less side effects than ACE-inhibitors (in particular, cough), they were not superior to ACE-inhibitors in terms of survival in the Losartan Heart Failure Survival Study (ELITE II).38 However, when patients with HF did not tolerate treatment with an ACE-inhibitor, treatment with ARBs reduced morbidity and mortality when compared with placebo, as revealed by the Candesartan in Heart Failure Assessment of Reduction in Mortality and Morbidity (CHARM) Alternative trial39 and a subgroup analysis40 of the Valsartan Heart Failure Trial (Val-HeFT).41 In this scenario (HF patients intolerant to ACE-inhibitors), and in analogy to ACE-inhibitors in the ATLAS trial,16 the Heart Failure Endpoint Evaluation with the Angiotensin II Antagonist Losartan (HEAAL) trial42 revealed that a higher dose of losartan (150 mg) was superior to a lower dose of the same drug (50 mg) in preventing HF hospitalisation. In contrast, the addition of ARBs on top of ACE-inhibitors did not improve overall mortality in the Val-HeFT41 or the CHARM-Added43 trials. However, cardiovascular mortality was improved by 16 % with candesartan in CHARM-Added trial.43 Furthermore, both trials showed reduced hospitalisation for HF deterioration (by 24 % in Val-HeFT and 17 % in CHARM-Added), whereas all-cause hospitalisation remained unchanged. While 35 % (in Val-HeFT) and 55 % of patients (in CHARM-Added) had a β-blocker in their background medication, only a few patients were treated with a MRA.41,43 Importantly, a post hoc analysis of Val-HeFT revealed that the ARB was particularly efficient in patients not taking a β-blocker or ACE-inhibitor (or neither), whereas it was adverse in those patients taking both.41 Since in the EMPHASIS trial with eplerenone, the MRA efficiently reduced mortality and morbidity when added to ACE-inhibitors and β-blockers,37 while ARBs did not achieve this,41,43 ARBs no longer remain a first-choice recommendation in patients with HF, while they received a class I level A recommendation in the current guidelines as an alternative in patients intolerant to an ACE-inhibitor.6

In patients with HF, elevated HR is associated with an adverse prognosis. For instance, HF patients with HR ≥87 bpm have a more than two-fold worse prognosis than patients with a HR between 70 and 72 bpm.11 Since β-blockers, besides their negative chronotropic effects, also have negative inotropic effects8 that may acutely deteriorate C.O.,21 ivabradine was developed as a selective HR-lowering drug by inhibiting the current of the ‘funny’ channel (If), which triggers slow depolarization in sinus node cells. Accordingly, ivabradine reduces HR only in patients with sinus rhythm (SR), while in patients with AF, it has no effect. The prevailing pathophysiological view has long been that HR reduction is beneficial for the heart primarily due to lowering oxygen consumption. However, more recent experimental and clinical evidence also indicates that HR reduction improves vascular function and through this, unloads the heart. In animal models of atherosclerosis, HR reduction prevented vascular oxidative stress and endothelial dysfunction, reduced atherosclerotic plaque formation and stimulated collateral artery growth through improving the bioavailability of nitric oxide and reducing inflammation.44,45 Oxidative stress and inflammation are of particular importance in diastolic HF (HFpEF), where coronary microvascular inflammation is thought to induce hypertrophy and myofilament stiffness.46 Accordingly, HR reduction with ivabradine improved vascular stiffness and LV systolic and diastolic function in a mouse model of HFpEF.47 However, also in patients with systolic HF, ivabradine reduced arterial stiffness, which increased stroke volume by unloading the LV.48,49Taken together, these data indicate that ivabradine may improve myocardial pathologies through actions on the heart and the vessels.

The first large randomised placebo-controlled trial with ivabradine was performed in patients with coronary artery disease and a LVEF <40 % (Morbidity-mortality evaluation of the If inhibitor ivabradine in patients with coronary artery disease and left ventricular dysfunction [BEAUTIFUL] trial50). In this trial, 87 % of patients were receiving a β-blocker, and mean HR at baseline was only 72 bpm and hence, the average (placebo-corrected) HR reduction by ivabradine was only six bpm. Accordingly, the primary endpoint (a composite of cardiovascular death, admission to hospital for acute myocardial infarction and admission to hospital for new onset or worsening heart) was completely unaffected by ivabradine (hazard ratio 1.0).50 However, in a pre-specified subgroup analysis of patients with a HR of ≥70 bpm at baseline, ivabradine reduced secondary endpoints, such as admission to hospital for fatal and non-fatal myocardial infarction (by 36 %) and coronary revascularisation (by 30 %).50

Based on these positive, but rather hypothesis-generating data,50 the Systolic Heart failure treatment with the If inhibitor ivabradine trial (SHIFT)51 assigned patients with stable HF (NYHA functional classes II-IV, LVEF≤35 %) who were in SR with a HR of ≥70 bpm to ivabradine or placebo, respectively. Background medication included ACE-inhibitors or ARBs (together 93 %) and MRAs (60 %). While 90 % of patients were treated with a β-blocker, only 26 % of these patients received the full recommended dose. Ivabradine reduced the composite endpoint of cardiovascular death or HF hospitalisation by 18 %, which was driven primarily by a 26 % reduction of HF hospitalisation, while reductions of cardiovascular or all-cause mortality were not significant.51 The most common side effects of ivabradine versus placebo were bradycardia (5 % versus 1 %) and visual side effects (so-called phosphenes; 3 % versus 1 %).