↳ This is a section part of Moment: The Anatomic–Functional Duality of So-called ‘Significant’ Atherosclerotic Stenosis – Update on Invasive Diagnostic Strategies in Coronaropathy 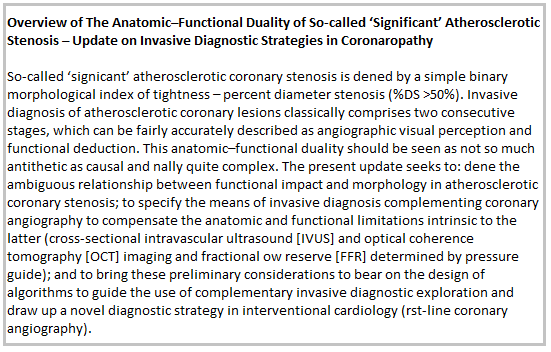 Haemodynamic impact is determined by many purely morphologic factors such as minimum lumen area, upstream arterial reference area, lesion length, wall lesion irregularity, lesion entry and exit angles, and vascular remodelling, but also by haemodynamic (flow and pressure) and rheological factors (haematocrit and blood viscosity).4 However, the overall ischaemic impact of coronary stenosis on underlying myocardial perfusion is the outcome of even more complex interactions, involving the effect of any spread of atherosclerosis to the epicardial arterial segment as a whole, and of changes in arteriolar resistive microcirculation, collateral circulation and myocardial tissue itself.5

Given the underlying physiopathological complexity, it seems highly reductive to see the haemodynamic impact of obstructive coronary artery stenosis as a simple change in relative diameter between an upstream segment considered to be normal and the minimum stenosis diameter (% DS).2

The 1974 Gould et al. study of a dog model of progressive quantified circumflex artery obstruction, statistically determined the degrees of stenosis associated with significant flow change at rest or under hyperaemia.6 Experimental hyperaemia is induced by 10 seconds total coronary artery obstruction. This was later replaced by a pharmacological effect, at first using papaverine, quickly changed to a continuous intravenous perfusion, or as is still used today, an intracoronary bolus injection of adenosine.7 At rest, an 85 % reduction in lumen diameter reduces coronary flow, while the hyperaemic response is affected as of 45 % stenosis and becomes significant as of 60 %. Gould therefore suggested that obstructive coronary stenosis becomes haemodynamically significant under effort or, more generally, under hyperaemia when diameter is reduced by 60 % or more. Cut-off quickly came to be set at a 50 % binary threshold, which became the functional index for significant coronary stenosis. This index has held sway for more than 40 years, although already criticised in the 1980s.8

Percent stenosis does seem to predict haemodynamic impact in a dog model in which the arterial network as a whole is strictly normal except for the mechanical obstruction. However, even in his princeps animal model, Gould reported variability in measurements, presaging greater uncertainty in patient-to-patient and artery-to-artery values.9 A clear discrepancy soon emerged between degree of stenosis (%DS) and maximal hyperaemia or coronary flow reserve (CFR) in several human studies using invasive or computed tomography (CT) coronary arteriograms.10,11 Indices such as CFR or myocardial microvascular resistance index fail to answer the question as to whether an epicardial coronary stenosis in itself accounts for observed myocardial ischaemia.2 CFR assesses the ratio of myocardial blood flow to hyperaemic flow; it cannot be compared to a patient’s normal value, so that normal CFR is poorly defined and highly variable from patient to patient.12 Moreover, the technique involves several limitations and above all is not specific to epicardial coronary stenosis exploration. The index of myocardial resistance (IMR) expresses only the resistance of intramyocardial microvasculature.13,14 Myocardial resistance pathologically elevated by microangiopathy or myocardial fibrosis cannot be improved by any epicardial coronary revascularisation.9

Thus only a physiopathological index specific to epicardial stenosis, and more precisely to the epicardial compartment itself, can be of use in indicating revascularisation. Such an index of epicardial circulation physiology should take account of normal and pathological (stenotic) epicardial flow rates. It also needs to:

The Intrinsic Limitations of Coronary Angiography
X-ray CA has been in use for more than 50 years; it gives planar projection images, leading to a confusion of planes. It provides only a densitometric luminogram by iodine contrast injection. Its spatial resolution has not improved over the 50 years, and the development of digital flat panels enhanced the images only by increasing the contrast resolution and eliminating geometric distortions. Visual and even computer-assisted quantitative analysis has never been very precise.17 The most widely used quantitative parameter is variation in %DS according to differential diameter between a reference segment and the minimum lesional diameter. In one study, only 60 out of 884 angiographically normal reference segments (6.8 %) were normal on intravascular ultrasound;18 moreover, the detection and quantification of minimum lumen diameter is imprecise.19 Detection and quantification of left coronary artery lesions on CA alone are also inaccurate.20 Finally, CA does not provide precise anatomic information on the different types of atherosclerotic lesion and their complications; it is thus impossible to detect plaques, quantify plaque burden, specify plaque composition, or detect intraparietal or adventitial haematoma or certain dissections. Even in analysing the lumen itself, intraluminal densitometric variations are ambiguous – endoluminal thrombus, calcified protrusion, highly excentric stenosis, flap and plaque rupture. Equivalent limitations in CT coronary angiography have also been described.21