↳ This is a section part of Moment: Contemporary Antiplatelet Strategies In The Treatment Of STEMI Using Primary Percutaneous Coronary Intervention 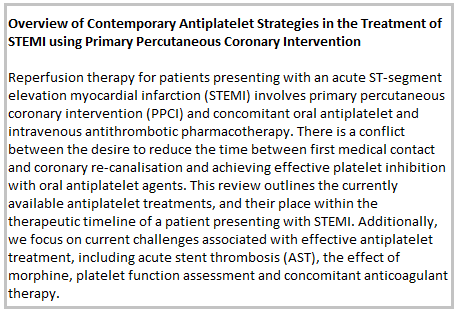 Adjunctive Antithrombotic Pharmacotherapy during PPCI
In addition to the array of oral antiplatelet therapy options in PPCI, there is continued debate regarding the optimal combination of antithombotic therapy. UFH and bivalirudin are most commonly used and the European guidelines for STEMI support their use with a Class I indication.27 The evidence supporting use of bivalirudin derived from HORIZONSAMI, 26 which demonstrated that bivalirudin compared with UFH and routine use of GPIs was associated with a reduction in mortality and major bleeding at 30 days, with a survival benefit that extended to 3 years. Further support for bivalirudin’s bleeding safety was demonstrated in the open-label European Ambulance ACS Angiography (EUROMAX) trial,28 comparing pre-hospital administration of bivalirudin versus UFH or low-molecular-weight heparin (LMWH) with optional use of GPI (58.5 % routine use). However, both trials were associated with an increased rate of AST with the use of bivalirudin and the elevated bleeding rate observed in the UFH arm of both studies has been attributed to the high rates of GPI use.

The recently published How Effective are Antithrombotic Therapies in primary percutaneous coronary intervention (HEAT-PPCI) trial29 was designed to specifically address the criticisms levelled at previous bivalirudin trials, specifically the efficacy of bivalirudin monotherapy against UFH with GPI use restricted to true ‘bail-out’ (13 % and 15 %, respectively). The study demonstrated a primary efficacy outcome (allcause mortality, cerebrovascular accident, re-infarction or unplanned target lesion revascularisation) of 8.7 % in the bivalirudin group versus 5.7 % in the heparin group (RR 1.52, 95 % confidence interval [CI] 0.9– 2.13). This reduction in major adverse ischaemic events with heparin was not associated with an increase in bleeding complications. Definite or probable stent thrombosis occurred more often with bivalirudin (3.4 versus 0.9 %, RR 3.91, 95 % CI 1.61–9.52). In the light of these new data, the most recent ESC guidelines on revascularisation have downgraded their recommendation for the use of bivalirudin to Class IIa1.

Acute Stent Thrombosis
The increased rate of AST observed with bivalirudin therapy has been attributed to the relatively short half life of bivalirudin (t1/2=25 minutes),30 resulting in a waning effect of the drug within 2 hours of withdrawal. The risk of AST is further exacerbated by the observed delay in platelet inhibition observed in STEMI patients treated with oral P2Y12 inhibitors. The Rapid Activity of Platelet Inhibitor Drugs (RAPID) Primary PCI study31 evaluated 50 patients with STEMI undergoing PPCI with bivalirudin monotherapy, randomised to prasugrel or ticagrelor at standard loading doses. There was no significant difference in residual platelet reactivity between both drugs but the study showed that effective platelet inhibition within 2 hours of loading was only achieved in half of patients. Four hours were required to achieve effective platelet inhibition in the majority of patients.

Morphine Effect on Platelet Activity
The RAPID investigators assessed the effect of opiate use on platelet reactivity. The use of morphine significantly affected the activity of prasugrel and ticagrelor, independently predicting high residual platelet reactivity 2 hours post-loading dose (odds ratio 5.29; p=0.012).31 The effect has been confirmed in a randomised controlled trial of 24 healthy subjects receiving 600 mg of clopidogrel with placebo or 5 mg of intravenous morphine. Morphine was shown to delay clopidogrel absorption, decrease plasma levels of the active metabolite and delayed the maximal inhibition of platelet aggregation by 2 hours.32 Furthermore, the opiate effect on platelet inhibition does not appear restricted to patients experiencing opiate-related nausea/vomiting.33

The negative interaction between morphine and oral antiplatelet agents is also supported by the Administration of ticagrelor in the cathlab or in the ambulance for new STEMI to open the coronary artery (ATLANTIC) trial,34 which demonstrated that the primary end point of ST-segment resolution was significantly improved with prehospital administration of ticagrelor in opiate-naïve patients. These findings challenge current guidance to administer analgesia early, on first medical contact.27