↳ This is a section part of Moment: The Role Of Percutaneous Haemodynamic Support In High-Risk Percutaneous Coronary Intervention And Cardiogenic Shock 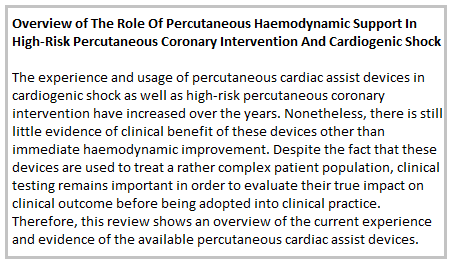 Evidence
The current experience with percutaneous mechanical support devices is mainly in patients with CS or during high-risk PCI.

High-risk Percutaneous Coronary Intervention
During PCI, haemodynamic compromise and complications can occur rapidly, for which support of a mechanical cardiac assist device can be helpful, particularly in patients with poor LV function. Support of a mechanical assist device might be an appealing treatment strategy, however, iatrogenic complications due to this invasive therapy should not outweigh the potential benefits.

The exact role of mechanical support devices during high-risk PCI, the indication as well as the optimal device, is still open to debate. There is no generally accepted guideline-based definition for high-risk PCI, but it usually includes features such as a reduced LV function (ejection fraction [EF] <30 %), procedural complexity and procedural ischaemic risk, such as in left main PCI or last remaining vessel PCI.

When looking at the use of IABP in high-risk PCI, a few registries showed a potential benefit.18,19 Perera and colleagues performed a multicentre randomised controlled trial in high-risk PCI using prophylactic IABP placement before the procedure. They showed that usage of IABP did not reduce 28-day major adverse cardiac and cardiovascular events (MACCE).20 Patients undergoing elective IABP placement had fewer procedural complications, however, the rates of access complications and minor bleeding was higher. However, longterm follow up of these patients did show a difference in mortality.21

Regarding the use of Impella 2.5 during high-risk PCI, a few registries showing safety and feasibility of Impella 2.5 during high-risk PCI.22–25 There is one randomised controlled trial (PROTECT II), which showed no difference between Impella 2.5 and IABP on major adverse events on 30 and 90 days. However, this trial was prematurely discontinued for futility and therefore underpowered. Subgroup analysis showed significantly lower major adverse event rates in the Impella 2.5 group after excluding the first patients per group at each site, suggesting a learning curve associated with the initial introduction of the Impella 2.5.26 The learning curve shows that clinical trials should better address the training aspect of new devices, especially when compared with more established devices. The learning curve should also be taken into account when starting to work with a new device, especially in unstable patients. Increased utilisation of percutaneous assist devices in this elective setting will provide an important opportunity for operators to become familiar with these new devices. With increasing experience, operators also will feel more comfortable with the use in an acute setting.

Intra-aortic Balloon Pump
Until recently, there were no large randomised controlled clinical trials investigating IABP therapy in the setting of STEMI complicated by CS. A meta-analysis of cohort studies published in 2009 concluded that there was insufficient evidence to support the previously strong guideline recommendation for IABP therapy in the setting of STEMI complicated by CS. The meta-analysis supported IABP therapy adjunctive to thrombolysis, but showed an increase in mortality for IABP therapy concomitant to primary PCI. More important the meta-analysis showed that the studied available observational data were importantly hampered by bias and confounding.27 A recently published Cochrane individual–patient–data meta-analysis of randomised controlled trials on patients with myocardial infarction complicated by CS, included six eligible and two ongoing studies with a total of 190 patients.28 The authors concluded that these few randomised trials were not able to show convincing evidence for either benefit of harm. The recently performed large randomised controlled multicentre IABP-SHOCK II trial randomised a total of 600 patients with STEMI complicated by CS, between IABP and medical therapy.29,30 No difference was found in 30-day all-cause mortality nor in other clinical endpoints. This trial confirmed the findings of the previously performed meta-analysis, showing no improved clinical outcome in patients treated with IABP concomitant to primary PCI in the setting of STEMI complicated by CS.

TandemHeart
Only a few small studies are performed using the TandemHeart but none of them were powered on mortality.9,10,31 These studies showed an improvement in haemodynamic values, mixed venous oxygen saturation and urine output and the two randomised controlled trials confirmed the superior improvement of haemodynamic parameters compared with IABP therapy. However, complications such as severe bleeding, arrhythmias and limb ischaemia occurred more often when using the TandemHeart than in cases of IABP. Although both studies were not powered to detect differences in mortality, no difference in mortality was found, which is also shown in a meta-analysis including both trials.32

Extracorporeal Membrane Oxygenation
Veno-arterial ECMO has been used successfully for several years in refractory CS, caused by myocarditis, postcardiotomy, myocardial infarction or heart transplantation.33 Described survival rates depend highly on the aetiology of the CS. In the setting of acute myocardial infarction, there are no randomised controlled trials. However, there are several cohort studies suggesting advantage from early use of ECMO.34,35 The usage of ECMO during resuscitation seems to increase, not only when resuscitation is performed inside a hospital, but also outside the hospital.13 The time from cardiac arrest to ECMO flow seems to be a critical determinant of outcome. However, no randomised trials have been performed yet.36

Impella
Only a few studies have reported on Impella usage in CS patients. Meyns et al. showed initial safety and feasibility in six patients with severe CS after maximal inotropic support and IABP therapy.7 They showed decreased PCWP and blood lactate levels and increased MAP and CO after usage of Impella. The ISAR-SHOCK randomised trial compared IABP with Impella 2.5 in CS patients.37 They showed increased cardiac index, CO and MAP in patients treated with Impella compared with IABP-treated patients. Also, they found that the overall cardiac power index (CPI) was slightly higher in Impella patients but the endogenous CO of the left ventricle was significantly lower because of the additional work of the device. Serum lactate levels were lower in the Impella group compared with the IABP group. No difference in mortality, major bleeding, distal limb ischaemia, arrhythmias and infections were found. The long-term effects of Impella support are described in the setting of STEMI-treated PCI and showed no aortic valve damage.38 Also, the Impella group patients showed more LVEF recovery compared with control patients. In severe CS, the Impella 5.0 may result in superior haemodynamic support. Engström et al. described the experience with the use of the Impella 2.5 and 5.0 and suggest that Impella 5.0 placement should be considered for profound CS patients.39 Either immediate insertion of Impella 5.0 or a quick upgrade to Impella 5.0 after initial 2.5 Impella was advised to be considered in cases with severe shock without signs of recovery. There are two ongoing randomised controlled trials evaluating Impella CP in the setting of CS: i.e. IMPRESS in Severe Shock (Impella CP versus IABP, NTR3450) and the Danish Cardiogenic Shock Trial (Impella CP versus optimal medical therpay, NCT01633502).

Combined Therapies
There are several cases describing a combination of ECMO and Impella therapy. It was found that the increased LV load due to the retrograde aortic blood return via the arterial cannula of ECMO could be counteracted by the use of Impella, which unloads the left ventricle.40–42 There have also been several reports on combining Impella with IABP therapy.43,44 However, the forward flow of the Impella may be degraded during diastole due to the diastolic pressure augmentation from the IABP. Although the combined use of IABP and Impella might theoretically increase coronary flow, due to a variety of technical reasons its combined use is not recommended. These reasons may range from misinterpretation of Impella alarms and the repetitious reductions of flow during IABP operation, which may prolong red cell transit times and thus increasing shear stress possibly leading to haemolysis. For patients with severe right heart failure, a combination of an Impella RP and a LV assist device has been described.17,45