↳ This is a section part of Moment: Optimum Utilisation Of Novel Antiplatelet Agents In Clinical Practice 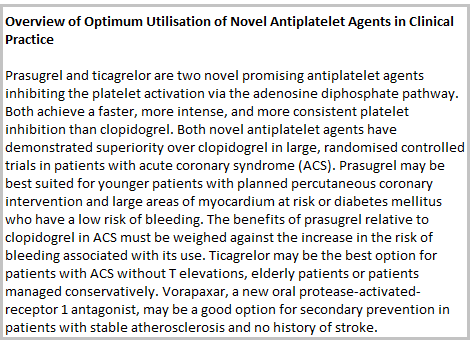 Prasugrel is a third-generation thienopyridine, and like clopidogel is a prodrug and binds irreversibly at the P2Y12 receptor. However, it exhibits a few advantages over clopidogrel – a more rapid and stronger antiplatelet effect and a very low rate of non-responders. Furthermore, genetic polymorphism of cytochrome P450 do not have an impact on the efficacy of prasugrel.9 After a 60 mg loading dose prasugrel reaches maximal plasma concentration at 30 min.10 In contrast, clopidogrel has a much longer onset of action at two hours after administration of the loading dose. The active metabolite of prasugrel has an elimination half-life of ≈7 hours. Among patients undergoing PCI, loading with 60 mg prasugrel resulted in greater platelet inhibition than a 600 mg clopidogrel loading dose. Furthermore, a maintenance prasugrel dose of 10 mg/day results in a more potent and consistent inhibition of platelet activation than the standard clopidogrel maintenance doses of 75 or 150 mg/day. The Trial to assess improvement in therapeutic outcomes by optimising platelet inhibition with prasugrel – thrombolysis in myocardial infarction (TRITON–TIMI) 38 trial included more than 13,000 ACS patients with known coronary anatomy. Planned PCI also showed that prasugrel (60 mg loading dose followed by a 10 mg/day maintenance dose) compared with clopidogrel (300 mg loading dose and a 75 mg/day maintenance dose) significantly reduced the combined primary endpoint of cardiovascular death, non-fatal myocardial infraction (MI) and non-fatal stroke (9.9 vs 12.1 %; HR=0.81; P<0.001).11 Rates of cardiovascular death (2.1 % vs 2.4 %; HR=0.89; P=0.31) were not reduced by prasugrel relative to clopidogrel, whereas rates of stent thrombosis were significantly lower (1.1 % to 2.4 %; HR=0.48; P<0.001)in the prasugrel-group. The diabetic subgroup (especially those with insulin dependent diabetes) had particular benefit from the prasugrel treatment. The relative risk reduction was 26 % in comparison to 8 % among non-diabetics. Unfortunately, this beneficial effect was accompanied by an increase of life-threatening bleeding complications (1.4 % vs 0.9 %; HR=1.52; P=0.01). Furthermore, among elderly and patients with a body weight of less than 60 kg no net clinical benefit was observed. Patients who had had a prior cerebrovascular event even had worse clinical outcomes. As a consequence, prasugrel is contraindicated in patients with prior stroke/transient ischemic attack (TIA). Its use is generally not recommended in patients aged ≥75 years or in patients with lower body weight (<60 kg). A reduced maintenance dose of 5 mg can be considered in these patients, but outcome data are not available with this dose. Although prasugrel markedly reduced ischaemic events after PCI for ACS, a major criticism of the TRITON–TIMI 38 trial was that the clopidogrel group received a 300 mg instead of a more effective 600 mg loading dose.

In the Testing platelet reactivity in patients undergoing elective stent placement on clopidogrel to guide alternative therapy with prasugrel (TRIGGER-PCI) study, the efficacy of prasugrel vs clopidogrel in patients with high on-treatment platelet reactivity after elective PCI was evaluated.12 No benefit was observed with prasugrel. Prasugrel is approved in combination with ASA in ACS with or without ST elevation patients with known coronary anatomy who are planned for PCI.

Ticagrelor
Ticagrelor is not a thienopyridine, but binds also reversibly at the ADP P2Y12 receptor.9 Ticagrelor is administered orally in its active form and does not need the metabolic activation required with thienopyridines. Similar to prasugrel, ticagrelor provides faster, more intense and more consistent platelet inhibition than clopidogrel. Its bioavailability seems to be less affected by genetic factors. Ticagrelor is rapidly absorbed with a maximum plasma concentration at 1.5 hours. Due to its shorter half-life, plasma levels are maintained for only 12 hours, making a twice-a-day regimen necessary (2 x 90 mg/day). This might be beneficial in bleeding complications or planned operations like coronary artery bypass graft (CABG) surgery, but it may pose a problem for noncompliant patients. However, the ONSET/OFFSET study demonstrated that the platelet inhibition 24 hours after the last dose was equivalent in ticagrelor- and clopidogrel-treated patients.13 These data suggest that patients who miss one dose of ticagrelor and patients with maintenance clopidogrel therapy will have similar platelet inhibition at 24 hours. Ticagrelor (180 mg loading dose and a 2 x 90 mg/day maintenance dose) was compared with clopidogrel (300 mg loading dose and a 75 mg/day maintenance dose, in case of PCI additional loading with 300 mg) in the Platelet inhibition and patient outcomes (PLATO) study in patients with ACS.14 In contrast to the TRITON TIMI 38 trial, ACS-patients were included regardless of the initial treatment strategy (medically or invasive). Furthermore, inclusion of patients pretreated with clopidogrel was allowed.

In the PLATO study, ticagrelor significantly reduced the combined primary endpoint of cardiovascular mortality, MI and stroke (9.8 % vs 11.7 %; HR=0.84; P<0.001) without increasing the risk of major bleeding. There were also reductions in cardiovascular, total mortality and stent thrombosis with ticagrelor. Ticagrelor has been associated with side effects such as bradycardia and dyspnoea, most likely related to blockage of adenosine reuptake. It usually occurs early in the course of treatment and in most cases is self-limited. Ticagrelor is approved in combination with ASA in non-ST or ST elevation ACS patients who are treated with either PCI, bypass surgery or medically. In patients with haemorrhagic stroke or patients taking medications that are strong CYP3A4 inhibitors or inducers ticagrelor is contraindicated.

A major criticism of the PLATO trial was that a significant interaction between treatment effect and geographic region was seen, with an apparently smaller ticagrelor effect in North America than in other regions (e.g. East Europe). In an analysis by Mahaffey et al. a significantly higher proportion of patients in North America receiving higher ASA maintenance dose (≥300 mg/day) was identified as a possible explanation for the regional difference.15 There is no clinical data on the efficacy of ticagrelor in setting of PCI in stable CAD.

Vorapaxar
Vorapaxar is an oral competitive protease-activated–receptor 1 (PAR- 1) antagonist that inhibits thrombin-induced platelet aggregation. In the Thrombin receptor antagonist for clinical event reduction in acute coronary syndrome (TRACER) trial, the addition of vorapaxar to standard therapy did not significantly reduce the primary composite end point (18.5 vs 19.9 %; HR=0.92; P=0.07) among patients with in non-ST elevation ACS.16 However, vorapaxar significantly increased the risk of moderate and severe bleeding (7.2 vs 5.2 %; HR=1.35; P<0.001), including intracranial haemorrhage (ICH) (1.1 vs 0.2 %; HR=6.45; P<0.001).

The Thrombin receptor antagonist in secondary prevention of atherothrombotic ischaemic events (TRA 2P) – Thrombolysis in myocardial infarction (TIMI) 50 trial was designed to evaluate the efficacy and safety of vorapaxar in reducing atherothrombotic events in patients with stable atherosclerosis treated with standard therapy.17 TRA 2P-TIMI 50 showed that vorapaxar was associated with a reduction in the composite end point of cardiovascular death, MI or stroke (9.3 vs 10.5 %; HR=0.87; P<0.001). A benefit was most apparent in patients with a history of MI and no history of stroke/transient ischaemic attack (TIA) who weighed more than 60 kg. However, vorapaxar was also associated with increased rates of moderate and severe bleeding (4.2 vs 2.5 %; HR=1.66; P<0.001), including ICH, with the latter occurring most frequently in patients with a history of stroke. On May 5, 2014, vorapaxar has received its first global approval in the USA for secondary prevention of atherothrombotic events in patients with previous MI and peripheral arterial disease. Vorapaxar must not be used in patients who have had a stroke, TIA, or ICH.