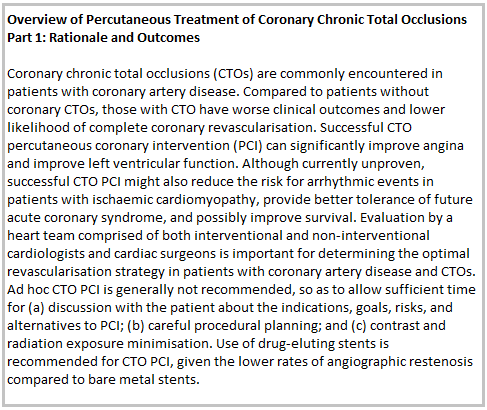 Outcomes after CTO Interventions
CTO PCI can improve angina and left ventricular (LV) function. Although registry data are promising, the potential role of CTO PCI to decrease the risk for ventricular arrhythmias, improve tolerance of subsequent ACS and improve survival has not yet been demonstrated.

LV Dysfunction
Left ventricular systolic function has been demonstrated to improve after CTO PCI in patients with baseline LV dysfunction,34–42 while no change in ejection fraction can be expected when the baseline LV function is normal.42 Left ventricular function improvement is dependent on the maintenance of CTO target vessel patency37,38 and on the viability of the perfused myocardial territory,39,40 therefore an assessment of left ventricular viability should be performed in case of left ventricular dysfunction. Theoretically, an improvement in LV function should improve heart failure symptoms, but this has not yet been demonstrated. A magnetic resonance imaging study of 170 consecutive patients with coronary CTO revealed prior myocardial infarction by late gadolinium enhancement in 86 %, a much higher proportion that previously recognised, although only 25 % of patients had Q waves on their electrocardiogram.43

Ischaemia may predispose to ventricular arrhythmias. Among 162 patients with ischaemic cardiomyopathy who received an implantable cardioverter defibrillator, 44 % had at least one CTO.44 During a median follow-up of 26 months, the presence of CTO was associated with higher ventricular arrhythmia and mortality rates (p<0.01).44 The preventive effect of CTO revascularisation on subsequent arrhythmias remains to be shown.

Tolerance of Future ACS
The presence of a CTO has been associated with worse outcomes in patients presenting with ACS, possibly due to the greater extent of myocardial injury during the initial ACS presentation.45

A similar adverse impact of CTO was observed in patients with ST-segment elevation acute myocardial infarction presenting with cardiogenic shock47 and in a series of patients with non-ST segment elevation acute coronary syndromes.48 A small retrospective study demonstrated better outcomes for patients who underwent successful vs failed CTO PCI after primary PCI for acute ST-segment elevation MI.49 The ongoing Evaluating XIENCE V® and left ventricular function in percutaneous coronary intervention on occlusions after ST-elevation myocardial infarction (EXPLORE) trial is assessing whether PCI of a CTO in a non-infarct-related artery within one week from primary PCI can improve LV dimensions and function.

Survival
There are no published, randomised controlled trials comparing CTO PCI with medical therapy or with surgical revascularisation. However, there are several observational studies that have consistently shown better survival among patients who underwent successful vs failed CTO PCI. In a meta-analysis of 13 observational studies7,27–32,50–55, mortality over a weighted mean follow-up of six years was 14.3 % among 5,056 patients with successful CTO recanalisation compared with 17.5 % among 2,232 patients with failed CTO recanalisation (odds ratio [OR] 0.56; 95 % CI, 0.43–0.72).33 Similar results were observed in two more recent studies56,57 but no difference was observed in a third study.58 In a large, single-centre, retrospective study, a mortality benefit was only observed among patients in whom the CTO target vessel was the left anterior descending artery.59

Ongoing Clinical Trials
To date no randomised-controlled clinical trials of CTO PCI vs medical therapy or coronary artery bypass graft surgery have been reported. Importantly, the Open artery trial (OAT) was not a CTO trial, as it included patients within 30 days from acute myocardial infarction.2 Two clinical trials comparing CTO PCI with optimal medical therapy (OMT) are ongoing.70 The Drug-eluting stent implantation vs optimal medical treatment in patients with chronic total occlusion (DECISIONCTO, http://clinicaltrials.gov/show/NCT01078051) trial is evaluating whether compared to OMT, CTO PCI will reduce the composite endpoint of all cause death, myocardial infarction, stroke and any revascularisation at three years after randomisation. The European study on the utilisation of revascularisation vs optimal medical therapy for the treatment of chronic total coronary occlusions (EURO-CTO) trial (http://clinicaltrials.gov/ct2/show/NCT01760083) is randomising patients to CTO PCI with biolimus-eluting stent implantation and OMT vs OMT alone and has as primary endpoints the QoL at 12 months and the composite of death or non-fatal myocardial infarction during a follow-up of 36 months. Finally, the Evaluating Xience V and left ventricular function in percutaneous coronary intervention on occlusions after ST-elevation myocardial infarction (EXPLORE) trial (http://www.exploretrial.com/) is randomising 300 patients presenting with ST-segment elevation acute myocardial infarction and a CTO in a non-infarct vessel to either CTO PCI within seven days of presentation or standard medical therapy. The study’s primary endpoint is left ventricular ejection fraction and end-diastolic volume, measured using cardiac magnetic resonance imaging at four months.