↳ This is a section part of Moment: Clinical Impact Of Stent Design 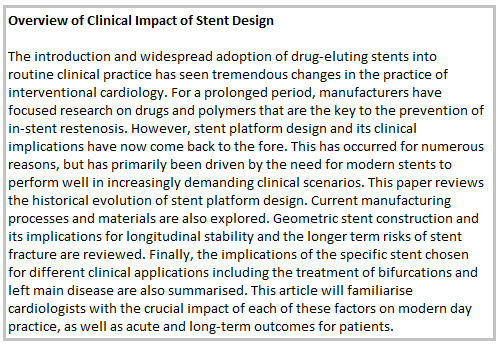 As the role of percutaneous coronary intervention (PCI) has evolved, inevitably, so too has the technology associated with this specialty. Initially, plain old balloon angioplasty (POBA) was developed as a strategy to ‘stretch’ focal stenoses within the coronary arteries leading to a relief from ischaemia and angina. Whilst potentially of great benefit to some patients, POBA was beset by a series of Achilles’ heels. These included early, unpredictable and abrupt vessel closure due to coronary dissection, subacute recoil of the dilated coronary lesion with the stenosis recurring relatively early, and later restenosis due to the healing response invoked by vascular injury from the procedure. Ultimately, supplementary technologies were needed to resolve these issues and this led to the concept of deploying bare metal stents (BMS) in the coronary artery. Early BMS were developed to more reliably treat short, focal areas of disease. The aim of using these devices was to cover disruption and stabilise dissection associated with POBA, thus preventing abrupt vessel closure. In addition, the vessel was scaffolded to prevent early recoil and the initial results from widespread adoption of coronary intervention with BMS led to benefits for patients.1 One feature of early BMS was that they were relatively bulky and stiff devices. This reflected their initial function for the treatment of focal and straightforward coronary lesions. As the practice of interventional cardiology evolved to meet the needs of patients with more complex coronary lesions, so too did the stents. There was an explosion of different manufacturers, stent designs and technologies.2 Therefore, early platforms quickly improved, becoming easier to deliver and thus more user-friendly. Whilst the majority of these devices were constructed from stainless steel, there was a range of stent cell construction (open versus closed), cell geometry, strut thickness and different materials were also explored (such as gold, carbon and a variety of others).

However, it soon became clear that BMS were beset by the late complication of in-stent restenosis (ISR). This late ‘healing phenomenon’ led to loss of the treated vessel lumen and a recurrence of ischaemia. Repeat procedures (target lesion revascularisation [TLR] and target vessel revascularisation [TVR]) became a frequent occurrence after PCI with BMS. It also became apparent that ISR was associated with many of the design features of these devices. These included longer stent length, smaller stent diameter, a high metal:artery ratio and strut thickness.3–5 Clinical features such as the presence of diabetes also contributed to stent failure.3 There were both early and long-term adverse consequences of ISR for patients.6,7 These events also led to a clinical disadvantage for patients with multivessel disease who were treated by PCI compared with those who were offered coronary artery bypass grafting (CABG).8,9

Ultimately, this brought about the development of drug-eluting stents (DES). These devices were first introduced in the pivotal Randomized Study with the Sirolimus-Coated Bx Velocity Balloon- Expandable Stent in the Treatment of Patients with de Novo Native Coronary Artery Lesions (RAVEL) trial.10 DES had polymers and a variety of different drugs coated onto stents to stop late lumen loss. The therapeutic goal was to reduce the inflammatory and healing response that occurred after stent implantation, with the aim of preventing ISR and its clinical consequences. DES were very effective in reducing levels of ISR relative to BMS and their use quickly became widespread. However, their introduction and dissemination meant that the original design concepts that applied BMS now also needed to facilitate timed and consistent drug delivery. By this time, the design goals that previously applied to stent manufacture had been expanded and significantly altered. Investigations of different drugs, polymers and their combinations became prominent and essentially superseded platform design as manufacturers sought to produce increasingly safe and effective devices.

One significant effect of DES was that patients with a previously difficult disease, such as those with diabetes or multivessel disease, could be treated.11,12 As a result, more and more challenging lesions became amenable to PCI. In addition, stent design was also pushed forwards by operator feedback that led manufacturers to encompass potentially desirable properties in their products. These included improved radiographic visibility, flexibility, device deliverability and conformity to the vessel. In general, the overall trend in design goals was to produce thinner stents that are more flexible but where the key mechanical property of the stent (the radial strength and hence the scaffold within the vessel) has been preserved.

Stent platform design and manufacture has now come back under the clinical spotlight for a variety of reasons. These include the expanding use of these devices in previously ‘taboo’ clinical areas (bifurcations, chronic total occlusions, left main disease) with an increasingly complex demand placed on their mechanical performance. It has become apparent that these properties are paramount not only with regard to the mechanical properties of the stents but also to clinical outcomes in these challenging clinical scenarios.