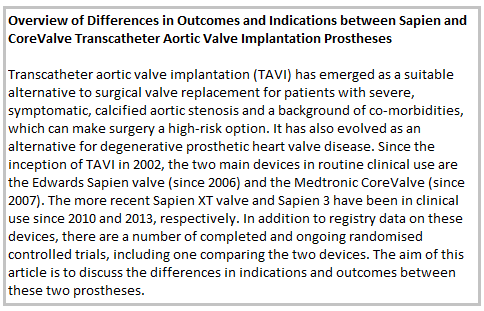 TAVI is a suitable alternative to surgical valve replacement in inoperable and a select group of high-risk patients with severe symptomatic aortic stenosis. Significant technological and device design advances have occurred since the first TAVI was performed. Two devices in current use are the MCV and the ESV. Although device design features may vary and individual device complications may be present, studies have not shown a difference in mortality between the two valve types. At present, device choice is dictated by physician preference, annular diameter and, in a small percentage of patients, by availability of transapical access route for ESV. It is unclear at present which of the two devices is better with respect to degree of AR, as it may be dictated by local anatomy rather than device choice; although due to its specific design features, the MCV was found in some studies to be associated with a higher rate of AR, which did decline overtime, perhaps explaining the lack of difference in outcome data between the two valves. The MCV was also found to be associated with a higher rate of permanent pacemaker implantation, and along with AR, these factors may well become more important if TAVI is introduced into a lower risk population.