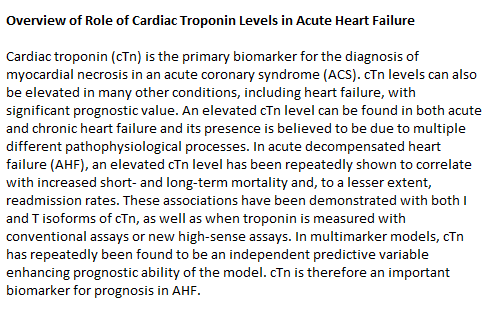 Cardiac troponin alone demonstrates significant prognostic use in patients with AHF, but it has also considerable use with other biomarkers in predicting outcomes. Repeatedly, cTn has been paired with B-type natriuretic peptide (BNP) or N-terminal pro-BNP (NT-proBNP) and shown prognostic value. In the ADHERE registry, risk of in-hospital mortality was evaluated in patients stratified aacording to BNP level (above or below the median of 840 pg/ml) and cTn level (increased or not). Patients with a BNP level above the median and an increased cTn were found to have an increased risk of in-hospital mortality with an OR of 2.09.40 When stratified by BNP and cTn, an escalating risk was found with: BNP ≥840 pg/ml/cTn not increased (OR, 1.56), BNP <840 pg/ml/cTn increased (OR, 1.69), and BNP ≥840 pg/ml/cTn increased (OR, 3.00). In a smaller study, an elevated NT-proBNP and cTnT were associated with increased rate of adverse events including mortality and rehospitalisation.41 Studies on the optimal time for measuring these biomarkers for predicting long-term outcomes have had conflicting results. One study showed that the measurement of NT-proBNP and cTn levels on admission are stronger predictors of longterm outcomes of death and rehospitalisation than values measured on discharge.42 Yet, another study found the NT-proBNP levels at discharge with a detectable cTnT value and New York Heart Association functional class at discharge were strongest prognostic factors for death and death or cardiovascular hospitalisation.43 Regardless, these studies show the combined prognostic use of cTn with BNP or NT-proBNP for predicting morbidity and mortality.

The addition of C-reactive protein (CRP) to cTn and BNP enhances prognostic ability in multimarker panels. In a study of 102 patients with AHF, the combination of CRP, BNP and cTn had the highest predictive value for mortality at 31 days.44 In a study of 593 patients, the addition of CRP, BNP and cTn to a model using clinical variables significantly improved prediction of 1-year mortality.45 However, only the addition of two of the three biomarkers was needed to improve predictive ability of the model, and the addition of all three biomarkers did not add significant benefit over adding two. HsTn also adds prognostic value in multimarker models. In a study of 107 patients with AHF, soluble ST2, hsTn, and NT-proBNP levels were measured on admission and assessed for predicting risk of death.46 The mortality rate was 0 % in patients with all three biomarkers below their optimal cut-off values and 53 % in patients with elevated levels of all three biomarkers. For each elevated biomarker, the risk of death increased with a HR of 2.64. These studies highlight the independent prognostic value cTn retains in predicting outcomes in multimarker prediction models.