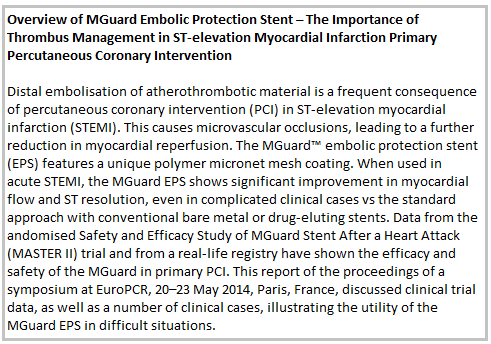 Dr Ran Kornowski, Rabin Medical Center (Tel Aviv, Israel), began by stating that as of 2013, 56 % of STEMI in Israel still received aspiration, and 46 % had glycoprotein (GP) IIb/IIIa infusion during STEMI. Only around 10 % received MGuard EPS implantation during STEMI. He then presented a case of an 88-year-old man with hypertension, chronic obstructive pulmonary disease (COPD) and renal dysfunction who presented with an extensive anterior wall STEMI. The duration of chest pain before admission was 1.5 hours and door-to-balloon time was 42 minutes. Echocardiography on admission showed moderate left ventricle (LV) dysfunction, and the patient was immediately taken to the catheterisation laboratory, where he received primary PCI of an occluded mid-left anterior descending (LAD) artery with a large thrombus burden. After wiring, a large amount of thrombus was seen on the angiogram. After aspiration, a significant amount of thrombus remained without restoration of normal flow even after an additional aspiration attempt. An MGuard Prime EPS (4 x 19 mm) was therefore implanted with immediate improvement in flow after deployment. After 30s, a TIMI 2/3 flow was achieved. Prior to discharge, echocardiography showed a substantial improvement in LV function.

In conclusion, this real-life case has demonstrated the utility of an MGuard EPS in an elderly patient with anterior STEMI caused by LAD occlusion by a large coronary thrombus, with limited efficacy of thrombus aspiration and anti-thrombotic regimen.

Dr Yaron Almagor, Shaare Zedek Medical Center (Jerusalem, Israel), presented a case that illustrated the effectiveness of the MGuard Prime in acute MI. The case was of acute anterior wall STEMI with total occlusion of the LAD. After a small balloon, the thrombus could clearly be seen using coronary OCT. Immediately after implantation of an MGuard Prime EPS, excellent reperfusion was achieved. OCT showed no thrombus protrusion. The MGuard Prime EPS showed excellent stent apposition by OCT with open side branches post stenting. He ended his presentation stating: “I never expected a result like this.”

Dr Carlos Cafri, Soroka University Medical Center and Ben Gurion University of Negev (Beer Sheva, Israel), presented a case of a 58 year-old man with diabetes who had been admitted after threee hours of chest pain. An electrocardiogram (ECG) revealed ST-elevation in inferior wall leads. Angiography showed occlusion in the right coronary artery (RCA). Manual thrombus aspiration resulted in restoration of TIMI 3 flow but considerable stenosis and thrombus remained visible while the patient was still experiencing chest pain. An MGuard Prime EPS (3.5 x 18 mm) was implanted, without predilatation to avoid high pressure during implantation; a long stent was chosen to avoid dislodgement of thrombus at the distal end of the stent. The outcomes were excellent. Dr Cafri concluded that the MGuard Prime EPS allows appropriate management of seemingly impossible thrombotic situations.

Dr Graham Cassel of Milpark Hospital, Johannesburg, South Africa, presented a case of a 52 year-old male with hypertension and hypercholesteraemia, who presented one hour after the onset of severe chest pain with inferior STEMI. Angiography showed a totally occluded RCA, as well as severe stenosis in the LAD and circumflex (CX) arteries. Following thrombus aspiration, TIMI 3 flow was achieved but an aneurysm was detected in the middle of the stenosis of the RCA. An MGuard Prime EPS (4 x 28 mm) was implanted, resulting in exclusion of the aneurysm and excellent distal flow. Two weeks later, when the LAD and CX were treated percutaneously, the MGuard Prime EPS still showed excellent angiographic results.

STEMI Demonstrative Cases 4
How Could I Treat a Bifurcation With High Thrombus Burden Despite Exhaustive Aspiration?

Dr Rafael Romaguera of Bellvitge University Hospital, Spain, presented a case of a 49-year-old male smoker admitted with 13 hours of ongoing chest pain with signs of an inferior STEMI on the ECG. Aspirin (250 mg), clopidogrel (600 mg) and unfractionated heparin (UFH; 100 UI/kg) were administered. Coronary angiography revealed an occlusion in the distal segment of the RCA, with a large thrombus at a bifurcation. Eight rounds of aspiration were performed with two different 6F catheters. An additional wire was advanced to perform aspiration of the posterior descending artery (PDA). However, these interventions failed to restore flow. After implantation of an MGuard (2.5 x 28 mm) EPS, restoration of flow was achieved. Subsequently, side branch occlusion was seen, possibly due to mechanical obstruction by the stent platform and net, or possibly due to thrombus being squeezed from the main vessel into the side branch. The PDA was rewired across the stent with an intermediate stiffness coronary wire. However, the operator was unable to advance the device through the mesh because of the angle and lack of support of a 6 Fr catheter. A 1.5 x 6 mm balloon was then advanced through an extension catheter and dilated. However, this failed to restore full flow so T-stenting with a BMS was attempted. This corrected the flow and the patient’s chest pain resolved despite a very long ischaemic time. The patient was discharged a few days later with dual antiplatelet therapy (DAPT). Concerns were raised about the impact of the T stenting solution combined a regular BMS and an MGuard with its dedicated mesh. Angiographic follow-up after six weeks showed TIMI 3 flow in both vessels without signs of restenosis. An OCT showed that the bifurcation was patent, with good apposition of the stent and strut coverage. Also, an improvement of LV function was observed. In conclusion, MGuard EPS implantation at a complex bifurcation lesion was feasible and improved myocardial perfusion. Importantly, the side branch could be accessed and treated even after MGuard EPS implantation in the main vessel without compromising the acute and long-term results.

Dr Maarten Vink, Onze Lieve Vrouwe Gasthuis (Amsterdam,The Netherlands), presented a case of a 68-year-old female with no cardiac history, although she had risk factors including smoking and family history. She was admitted following the acute onset of chest pain and received heparin, aspirin and prasugrel in the ambulance. Angiography revealed a long thrombus-containing lesion in the ostium of the LAD with impairment of flow (TIMI 1). Wiring of the lesion improved the flow and since it was important not to dislodge the thrombus, aspiration was not chosen nor was pre-dilatation. Instead, direct stenting was performed with an MGuard Prime EPS (3.5 x 28 mm); a long stent was required to cover the thrombus. Immediately afterwards, TIMI 3 flow was achieved and the patient was symptom-free with only a minimal rise in cardiac enzymes. An ECG revealed complete ST resolution after the procedure and no apparent wall motion abnormalities at three months follow up. Dr Vink concluded that there is no need for thrombus aspiration and/or pre-dilatation if the TIMI flow is ≥1 and that the MGuard may allow achievement of fast restoration of flow with minimal use of equipment.

The publication of this article was supported by InspireMD.