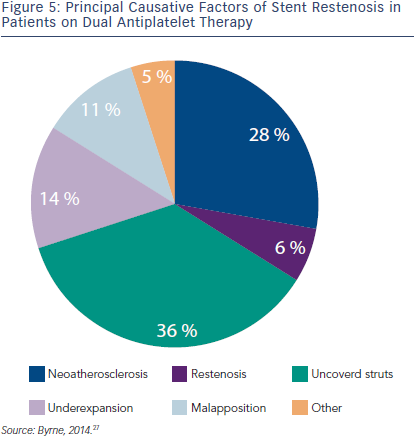 Professor Pieter Stella on the University Medical Centre, Utrecht, (the Netherlands) discussed non-comer or non-regular patients. Patients taking oral anticoagulant therapy have acute management issues during the PCI procedure such as choice of vascular access site and anticoagulant and antiplatelet therapy management. Longterm management issues risks of bleeding, stroke, target vessel revascularisation and stent thrombosis. Patients aged over 80 years represent a growing patient population for whom the reduction in mortality and MI rates with DES relative to BMS is particularly marked.26 Patients with DAPT issues present numerous issues, including length of treatment duration, cost, potential side effects, risk of late stent thrombosis and bleeding complications. However, 70 % of the issues associated with DAPT issues could be prevented with new stents such as Cre8 (see Figure 5).27

The stent of choice in non-comer patients according to standard practice is the BMS. However, the Cre8 offers an alternative in the form of a DES with a very safe profile, an abluminal drug, rapid but limited neo-endotheilialisation, limited neo-intima and low LL.

Professor Stella considered the clinical evidence in support of the Cre8 DES and presented a case of a male patient aged 78 years, admitted for treatment of colon cancer. He presented with acute coronary syndrome with inferolateral leads on ECG. A Cre8 stent was implanted and four weeks of DAPT prescribed. The stent was examined by OCT at four weeks. OCT revealed a small neointimal layer and no uncovered struts. The patient proceeded to colon surgery and two years later had no angina, no TLR and was taking only aspirin. In terms of scientific evidence, the NEXT and Demonstr8 clinical trials have been discussed. The ReCre8 trial is an investigator initiated all comers study. It is a prospective, randomised multicentre study that aims to recruit around 2,200 patients. Patients will be randomised to the resolute integrity DES (MDT) or Cre8. The study will also investigate the use of DAPT for three months vs one month in elective PCI. Clinical follow up will be at 12 months and three years, and the primary endpoint will be all MACE.