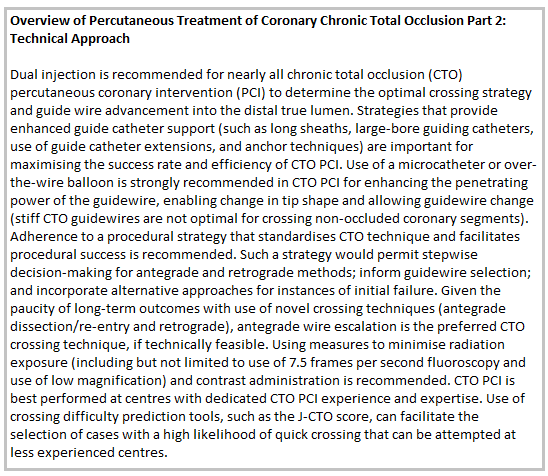 The femoral approach is the preferred access route by most operators. However, the radial approach might be chosen because of severe peripheral vascular disease, operator’s preference or for contralateral injection. The guiding principle of access selection is that operators should use access routes that support their typical and optimal technique.1 The relative merits of potentially larger sheath/guide sizes (femoral) can be weighed against the reduction in vascular complications and improved patient comfort (radial).2,3 Both are acceptable. When femoral access is used, long (45 cm) sheaths can overcome iliac tortuosity and increase guide catheter support.

Guiding catheter size is usually limited to six French (occasionally seven French) from the radial approach, compared with standard eight or seven French sheaths and guides used in transfemoral CTO PCI. Good passive support with coaxial alignment is crucial, especially in complex CTO procedures. Although the choice of the guiding catheter shape is generally dictated by personal experience, it is important to be willing to search for a guide with optimal back-up support rather than accepting one with merely satisfactory support. The radial operator should be familiar with active guide manipulation to augment the support, and all operators should be versed in balloon anchoring and mother-and-child techniques to improve support when needed.4

Dual injection is best performed using low-magnification, so that the entire coronary tree is visualised without panning. Careful study of the collaterals not only provides important information in choosing the most appropriate collateral, but will also alert the operator to the risk for ischaemia and haemodynamic or electrical instability if the wired collateral becomes occluded. Careful and detailed review of the angiogram is critical for creating a primary and alternative CTO treatment strategies to optimise the efficacy, efficiency and safety of the procedure.7

Anticoagulation during CTO PCI is best achieved with unfractionated heparin because it can be reversed with protamine in case of perforation and also allows titration of the anticoagulant effect (an activated clotting time of >350 seconds is recommended by many operators during retrograde CTO PCI to minimise the risk of donor vessel and guide thrombosis).8 As with all PCI, preloading with a P2Y12 ADP receptor inhibitor is important to reduce the risk of acute stent thrombosis and peri-procedural myocardial infarction.

Predicting the difficulty of CTO crossing with a guidewire is important for case selection and procedural planning. The Multicentre CTO Registry of Japan (J-CTO) score is determined by assigning one point to each of five variables (previously failed lesion, blunt type of entry, calcification, bending, and occlusion length). Patients are classified into four difficulty groups: easy (J-CTO score of 0), intermediate (score of one), difficult (score of two), and very difficult (score of ≥3). The J-CTO score correlated well with the probability of successful guidewire crossing within 30 min (87.7 %, 67.1 %, 42.4 %, and 10.0 %, respectively)9 and was recently validated in an independent single-centre Canadian cohort.10 In a large retrograde CTO PCI series the only predictors of procedural failure were corkscrew tortuosity of the collateral channel and nonvisibility of the collateral connection with the recipient vessel.11

Antegrade recanalisation of CTOs has been and remains the most common approach worldwide.12–14

Very soft tapered polymeric wires are currently the initial wire choice in most CTO procedures. In approximately 40 % of cases, these wires will cross the occlusion by taking advantage of small, invisible channels or by tracking relatively soft tissue.5 The current trend in antegrade recanalisation is to rapidly step-up to stiff, spring-coil, tapered wires to overcome any hard, calcified or fibrotic segments of the occlusion and then quickly change to soft polymer/hydrophilic wires to continue tracking along the occluded segment and complete the crossing of the CTO.7,15 Balloons or catheters should never be advanced over a wire unless it is certain that the wire is in the structure of the vessel, as wire perforations at the body of CTO are usually benign but can be catastrophic if larger equipment is advanced outside the vessel. Moreover, the CTO crossing wires should be exchanged once they access the distal true lumen for workhorse safer wires, as distal perforation of small vessels can cause delayed tamponade.16

Parallel Wire Technique
This technique is applied when the first wire enters the false lumen. The first wire is left in place, and a second wire is passed parallel to the first wire aiming for the distal true lumen. Following this approach, the first wire keeps the dissection channel closed and serves as a marker for advancing and redirecting a second wire, which is selected for greater stiffness and control to overcome lesion resistance.17 Occasionally, three or more wires are used. Use of the parallel wire technique can reduce the need for multiple antegrade contrast injections, given that the first wire serves as a marker. Improved guidewires and modern re-entry techniques have reduced the need for parallel wiring in many programs.

Techniques with Subintimal Tracking
The original Subintimal tracking and re-entry (STAR) technique introduced by Colombo et al.18 involves fashioning an “umbrellahandle- shaped” bend at the tip of a hydrophilic wire once the wire is within the dissection flap. Force is then applied to this tip and evenly distributed over a large surface area and along the length of the umbrella-handle in order to break through the sub-endothelial layer, thereby creating a communication between the false lumen and the true lumen. In theory, the looped “knuckle wire” follows the subintimal path to a point where the dissection can no longer be propagated, thereby achieving re-entry. The limitations of this method include unpredictability of the re-entry location and inability to prospectively control the major side branches proximal to the re-entry site, which can result in poor outflow and high re-occlusion rates, often >50 %.19,20

In order to simplify the original STAR technique and to make it more widely applicable, Carlino et al. introduced the contrast-guided STAR technique,21 which consists of gently injecting contrast into the subintimal space via an over-the-wire balloon or microcatheter or by employing the “microchannel technique”22 where contrast is injected with the aim of enlarging and connecting the microchannels that already exist within the occluded vessels. Galassi et al.23 further refined the STAR technique by proposing the “Mini-STAR” variant that uses very soft polymeric guidewires, the Fielder family of wires, Asahi Intecc (Nagoya, Japan). By forcing this type of wire with support from a microcatheter, a J-tip shape is automatically created within the occlusion, allowing for “mini subintimal tracking” and the creation of significantly smaller subintimal spaces. Finally, the limited antegrade subintimal tracking (LAST) technique, introduced by Dr Thompson and Dr Lombardi, is a similar technique designed for refractory anatomies. It uses a stiff, polymer-jacketed wire or a stiff, nonjacketed, penetration wire to redirect to the distal true lumen after facilitating device advancement with the knuckle wire technique.24 Wire-based subintimal tracking techniques, irrespective of the method chosen, are best applied only as a bail-out to refractory antegrade and retrograde procedures in well-selected patients.