↳ This is a section part of Moment: Alcohol Septal Ablation For The Treatment Of Hypertrophic Obstructive Cardiomyopathy 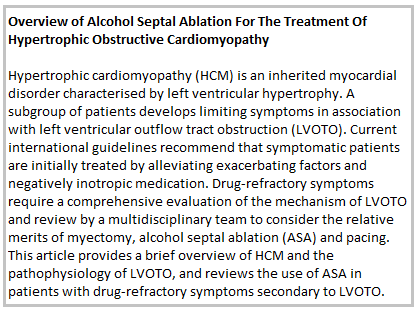 Hypertrophic cardiomyopathy (HCM) is a genetic disorder of cardiac muscle with a heterogeneous clinical course.1 The disease is clinically characterised by left ventricular hypertrophy (LVH), which is typically asymmetric, and a subgroup of patients have left ventricular outflow tract obstruction (LVOTO) caused by systolic anterior motion (SAM) of the mitral valve leaflet(s).2,3 LVOTO is often associated with limiting cardiovascular symptoms and a worse prognosis.4–8

This article provides a brief overview of HCM and the pathophysiology of LVOTO, and reviews the use of alcohol septal ablation (ASA) for the treatment drug-refractory symptoms secondary to LVOTO.

HCM is defined by the presence of LVH (left ventricular wall thickness ≥15 mm in a single myocardial segment) in the absence of systemic hypertension, congenital heart disease and valve lesions of sufficient severity to explain the observed degree of hypertrophy.1,9 In first-degree relatives who have inherited a disease-causing mutation, lesser degrees of LVH are sufficient to make the diagnosis.10,11 The diagnosis is reached by integrating clinical and imaging data from echocardiography and increasingly cardiac magnetic resonance (CMR) imaging.

The prevalence of HCM ranges from 0.02 % to 0.23 %, depending on the characteristics of the study population and methodology used.12–20

In adults, HCM is primarily inherited in an autosomal dominant manner and is caused by mutations in cardiac sarcomere protein genes.21–23 Mutations in these genes can be found in ~60 % of patients with HCM,21–23 and the majority involve cardiac myosin binding protein-C (MYBPC3) and cardiac myosin heavy chain (MYH7).24 There is a poor correlation between genotype and phenotype.25,26