↳ This is a section part of Moment: Alcohol Septal Ablation For The Treatment Of Hypertrophic Obstructive Cardiomyopathy

LVOTO at rest is encountered in ~30 % of patients with HCM, and is associated with limiting symptoms (dyspnoea, angin

A characteristic feature of LVOTO is that the severity of the obstruction is dynamic and subject to prevailing haemodynamic conditions. LVOTO is exacerbated by conditions causing reduced preload (e.g. Valsalva, squat to stand), reduced afterload (e.g. vasodilators) or positive inotropes.3 Notably, although LVOTO is most often seen in HCM, it may also occur in other conditions or physiological states and is not pathognomonic of HCM.34,35 In a smaller subgroup of HCM patients, obstruction can develop at the mid-left ventricular cavity. Mid-cavity obstruction is caused by the systolic apposition of hypertrophied mid-ventricular segments and/or papillary muscles creating a characteristic hour-glass appearance with a distinct apical cavity.36,37 This form of obstruction is often associated with apical aneurysm formation.36,37 Mid-cavity obstruction can exist in isolation (see Figure 2) or in conjunction with LVOTO. Even though ASA has been used in the treatment of mid-cavity obstruction,38,39 this is not routine practice and further discussion is beyond the scope of this review.

All patients with HCM should undergo a detailed transthoracic echocardiogram to examine: 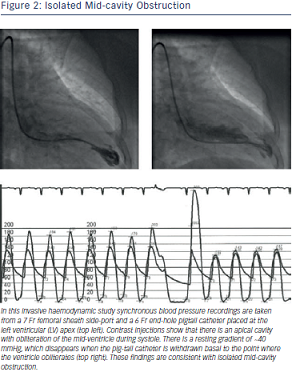 If the transthoracic echocardiogram fails to provide the necessary diagnostic information, a transoesophageal echocardiogram, CMR or an invasive haemodynamic study may be required.

An instantaneous Doppler LVOT gradient of ≥30 mmHg is considered significant, and such patients are classified as having the obstructive form of the disease. However, LVOTO is considered to be haemodynamically significant only when the LVOT gradient is ≥50 mmHg.3 There are few data to support these thresholds,3 which are largely empirically defined and reflect an understanding that when LVOTO is mild, therapeutic reduction of LVOTO is less likely to improve symptoms, and alternative causes of severe symptoms should be sought.

Since LVOTO is dynamic, obstruction may not be apparent in the supine patient under resting conditions. Exercise, the Valsalva manoeuvre, postural changes or an isoprenaline infusion help demonstrate latent LVOTO.6,40–42 These additional tests are mandatory in the evaluation of patients with symptoms suggestive of obstruction, which is not demonstrable at rest.