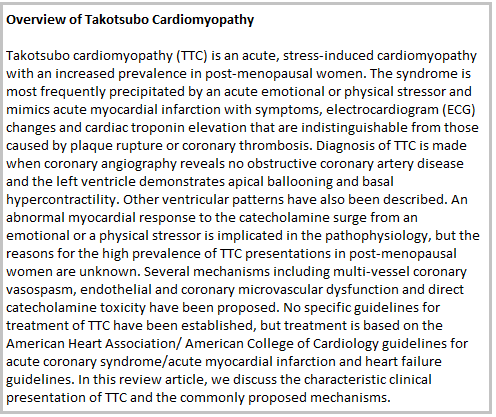 The clinical presentation of TTC is indistinguishable from acute MI in terms of symptoms, elevation of cardiac enzymes and ECG changes. The most common symptoms upon presentation are anginal chest pain and dyspnea. Syncope can also be a presenting symptom but is less frequently observed. Patients can less commonly present with arrhythmias, sudden cardiac death, asystole or cardiogenic shock. There are many ECG patterns described in TTC, most prominently ST elevations and/or diffuse T wave inversions, and prolongation of the QTc interval.3,4,17 The ST elevations occur primarily in the precordial leads therefore mimicking an acute anterior MI.4 The ST elevations typically resolve after 2–3 days and rarely will patients develop pathological Q waves. Similarly, the T wave inversions are also transient and resolve within 3–4 months. Other less-frequent ECG findings include ST depressions, new-onset bundle branch block, high-degree atrioventricular (AV) block, or simply a normal ECG.3 Additionally, troponin is often elevated, which further makes TTC difficult to distinguish from ACS. Multiple studies have noted that the extent of troponin T elevation is less than that of STEMI and inexplicably low for the wall motion abnormalities seen with TTC.4 Furthermore, the magnitude of troponin elevation does not correlate with the ECG pattern, clinical features, LV contraction pattern or patient outcomes.10

For the typical presentation of TTC, imaging of the LV shows apical and mid-wall hypokinesis with a hypercontractile basal myocardium.2,3 Atypical patterns of LV wall motion abnormalities exist in TTC and are increasingly recognised, which include isolated basal ballooning, mid-ventricular ballooning with basal and apical sparing and biventricular ballooning.3 The most common atypical form is the ‘inverted Takotsubo’ pattern that consists of basal ventricular akinesis with normal apical function.2,3,17

There are no specific guidelines for the treatment of LV dysfunction in TTC. Physicians generally follow the AHA/American College of Cardiology (ACC) treatment guidelines for ACS/non-ST segment elevation myocardial infarction (NSTEM/STEMI), as the syndrome’s presentation mimics ACS.33,34 Although only found in 20 % of patients, left heart failure is the most common complication of TTC.4 Angiotensin-converting-enzyme (ACE) inhibitors and diuretics are used for LV dysfunction and treatment of acute heart failure as needed.35 Patients are also started on an alpha and beta-blocker given the catecholamine surge in TTC. However, some authors do not recommend beta-blockers due to the concern of unopposed alpha stimulation in the setting of catecholamine excess.36

In the setting of cardiogenic shock, a differentiation should be made between pump failure and LVOT obstruction. If LVOT obstruction is present, then preload and afterload optimisation with the use of beta- blockers is recommended. Propranolol was shown to significantly increase left ventricular ejection fraction (LVEF) in patients with LVOT obstruction, but not in those without it.23 Beta-blockers will reduce the ventricular gradient and therefore reduce hypotension and increase LVEF. If dobutamine is given in the setting of LVOT obstruction, it will worsen the ventricular gradient and subsequently exacerbate hypotension.23 In cases of cardiogenic shock from primary pump failure, inotropic therapy did not show any benefit due to stimulation of the beta-2 and alpha adrenergic receptors, which can further exacerbate TTC.37 As a result, there should be early consideration of the possibility of intra-aortic balloon pump use. In some case reports, the use of levosimendan, a non-catecholamine inotrope, is shown to be beneficial in treating patients with cardiogenic shock due to pump failure.38,39 However, no large-scale studies have been carried out to date to prove efficacy.

Given apical hypokinesis in TTC, echocardiography and often cardiac MRI are needed to evaluate for LV thrombus. Anticoagulation is considered in the initial stages where there is severe LV dysfunction, and especially if thrombus is identified in the LV apex.4 Anticoagulation should be used with caution due to the increased risk of LV rupture with apical ballooning.36 There are no current guidelines on the duration of therapy with anticoagulation. Patients with recurrent episodes can be continued on beta-blocker therapy in addition to stress management.