Introduction on Is Hyperaemia Essential for Accurate Functional Assessment of Coronary Stenosis Severity? 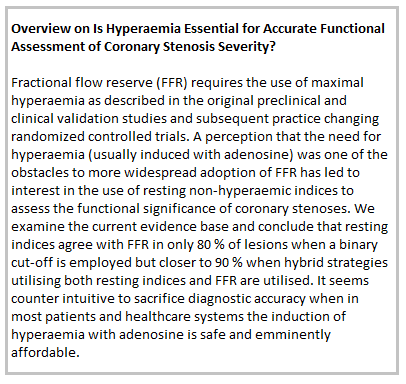 The original studies of coronary balloon angioplasty performed by Andreas Gruentzig attempted to employ physiological guidance by measuring trans-stenotic gradients with over-the-wire angioplasty catheters.1 However, these catheters were of such large calibre that they contributed to the stenosis being assessed and in addition, measurements were made at rest as the importance of assessing functional stenosis severity during hyperaemia was not yet fully appreciated. The development of pressure and flow (Doppler) sensing coronary guide wires in the early 1990s led to a re-emergence of physiologically guided percutaneous coronary intervention (PCI). A series of studies using Doppler-derived measurements of coronary flow velocity to calculate coronary flow reserve (CFR) were conducted with variable results, partly related to the technical difficulty of recording stable flow velocity signals but mainly to the fact that CFR cannot separate out the contribution to inadequate myocardial blood flow of resistance in the stenotic large-calibre epicardial conduit vessels (the target for intervention) from that in the microcirculation. The concept of pressure-derived fractional flow reserve (FFR) was first described by Pijls et al. in 19932 and following proof-of-concept studies, several clinical trials demonstrated that the use of FFR to guide PCI was not only associated with improved clinical outcomes but was also highly cost effective.3–6 Despite this, the worldwide use of FFR remains disappointingly low at around 5–10 % of all PCIs.7 This figure has been confirmed in a large recent survey by Toth et al.8

Various reasons have been proposed for the low utilisation of FFR, including the cost of the pressure wires as well as the cost, inconvenience and side effects associated with the induction of hyperaemia. In response to this, investigators have explored the ability of resting pressure-derived indices of stenosis severity to predict FFR and thereby to potentially remove the need for hyperaemia, at least in some patients. In this review we will discuss the role of one of these indices, the instantaneous wave-free ratio (iFR), and examine the strengths and weaknesses of iFR and FFR in detail with emphasis on the available evidence to date.