Physiology on Is Hyperaemia Essential for Accurate Functional Assessment of Coronary Stenosis Severity?

FFR is the ratio of mean distal coronary pressure and mean aortic pressure measured during maximal hyperaemia that is generally achieved through administration of a potent vasodilator such as adenosine, ATP or papaverine either by IV infusion or by intracoronary (IC) bolus injection. By rendering myocardial microvascular resistan 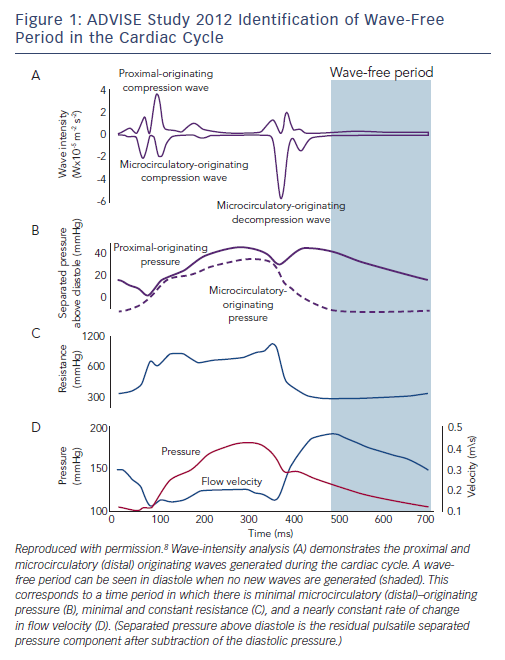 ce constant and minimal, it is possible to separate out the impact of disease in the epicardial conduit artery on myocardial blood flow2.

iFR was first described in 2011 following a proof-of-concept study in 157 coronary stenoses in which FFR was compared with resting (non-hyperaemic) trans-stenotic pressure gradients measured in a time period beginning 25 % into diastole and ending 5 ms before the onset of systole, the ‘wave-free’ period.9 It was proposed that coronary microcirculatory resistance was already constant in this window and as low as whole-cycle resistance during hyperaemia (Figure 1). In theory, this should allow accurate prediction of FFR, and in this initial study iFR was found to have a strong correlation with FFR with a receiver operating characteristic area under the curve (ROC AUC) of 93 % for iFR≤0.83 predicting FFR≤0.80.9 For decision making in the cath-lab, the investigators proposed that an iFR value of 0.83 could be equated to an FFR value of 0.80.

Evidence to Support the Use of FFR

The original validation of FFR demonstrated that below a cut-off value of 0.75 there was 93 % concordance between FFR and a triple gold standard of exercise stress ECG, single-photon emission computed tomography and dobutamine stress echo performed before and after PCI.3 The DEFER study clearly demonstrated that it was safe to postpone intervention on lesions with an FFR≥0.75.5 The FAME study demonstrated that in patients presenting with mul 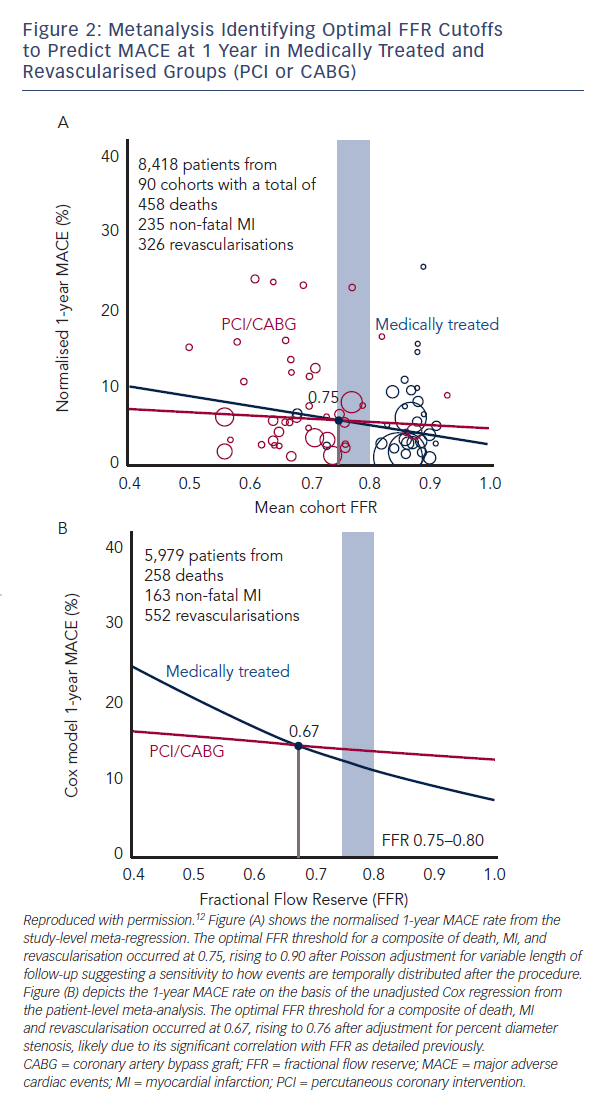 ti-vessel PCI, FFR guidance was associated with reduced rates of mortality or myocardial infarction (MI) at 2 years: 12.9 % in the angiography-guided group versus 8.4 % in the FFR-guided group
(p=0.02).4 The FAME 2 study demonstrated a markedly reduced rate of death, MI, and urgent revascularisation in patients with stable angina with at least one lesion and an FFR≤0.80 when treated by PCI plus optimal medical therapy compared with optimal medical therapy alone: 4.3 % versus 12.7 % (HR 0.32; 95 % CI 0.19–0.53; p<0.001). In a subsequent landmark analysis of the clinical outcomes from day 7 to 2 years, essentially excluding periprocedural type 4 MI, the combined endpoint of death and non-fatal MI was significantly reduced by PCI (4.6 % versus 8.0 %; p=0.04) despite a 40 % crossover from medical therapy alone to PCI.5

FFR assessment provides more than just physiological information. The SYNTAX score is a widely used tool that can stratify patients into low, medium and high risk for PCI as opposed to surgical revascularisation.10 The functional SYNTAX score combines FFR data with the angiographically derived SYNTAX score and potentially facilitates the selection of patients who will have equivalent outcomes with PCI or surgery.11 In terms of predicting an overall prognostic benefit from PCI, a recent meta-analysis with a combined endpoint of death, MI and revascularisation demonstrated that FFR<0.75–0.76 was associated with a clear beneficial effect of elective revascularisation (Figure 2).12

FFR at the Time of Diagnostic Angiography?

The data from the numerous trials mentioned above have firmly established the safety of FFR guidance in patients already referred for PCI. This has been supplemented by a large French registry in over 1,000 patients who had at least one intermediate lesion of 35 %–65 % diameter stenosis with overall treatment strategy recorded before and after FFR in addition to follow-up for 1-year endpoints.13 Final management changed in 43 % of cases including 33 % of patients initially assigned to receive no revascularisation, 56 % of patients assigned to PCI and in 51 % of patients assigned to coronary artery bypass graft surgery (Figure 3). Major adverse cardiac event rates (death, MI or unplanned PCI) were similar at 1 year for patients whose treatment was reclassified and those who remained in their original treatment group following FFR (11.2 % versus 11.9 %; p=not significant).13 Similar findings were reported in the RIPCORD study from the UK.14